Model Gisele Bündchen shared an adorable side-by-side shot of her and her daughter Vivian, 7½, practicing the same yoga pose in 2013 and 2020

Once a yogi, always a yogi!

On Tuesday, Gisele Bündchen shared an adorable side-by-side of herself with daughter Vivian Lake, 7½, practicing the same yoga pose in both 2013 and in 2020.

In the photo on the left, Vivian, who was only a few months old at the time, is seen trying to copy her mother's yoga pose as she sits on her knees and lifts her tiny arms into the air.

Now, seven years later, Vivian has perfected the pose, keeping her arms and legs straight in the graceful pose as Bündchen, 39, does the same.

The mother-daughter duo also moved their practice in the photos, with the first picture being in what appeared to be a living room while the more recent shot showed the pair stretching outside by the pool.

"My little yoga partner is growing so fast! I love her more than words can express! #love #family #yoga 2013-> 2020 💕💕💕," Bündchen — who shares Vivian and 10-year-old son Benjamin Rein with husband Tom Brady — raved in conclusion, also including the caption in her native Portuguese.

The NFL star was quick to comment on the photo with a sweet response. "Vivi loves her Mommy ... ❤️❤️❤️ and I do too!!!" wrote Brady, 42, who also shares 12-year-old son John "Jack" Edward with ex Bridget Moynahan.

The couple — who were married in 2009 — have been living in Florida after the New England Patriots quarterback signed with the Tampa Bay Buccaneers, and are currently renting a mansion from pal Derek Jeter.

Last month, the supermodel honored her football star husband on Father's Day with a heartwarming message on Instagram, along with a photo of the couple with their children.

"To all the great dads out there, especially to my sweet dad and my loving hubby, Happy Father's Day!" she began.

In thanking his wife for the special post, Brady commented, "I love my family! ❤️❤️." 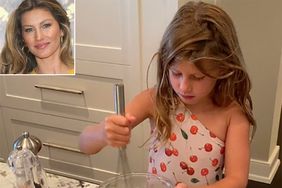