"Maybe one day I'll give her the bad journal just to be real about it," says Gigi Hadid, who shares baby daughter Khai with Zayn Malik

Gigi Hadid put pen to paper during her first pregnancy.

The supermodel, 26, reflects on her time awaiting the arrival of daughter Khai, whom she welcomed with Zayn Malik in September, for Harper's Bazaar's August 2021 issue, telling the magazine she kept multiple journals throughout that journey.

Hadid adds that the so-called "bad journals" captured her "anxieties and days where I felt like, 'Am I good enough to be a mom?' "

"I didn't want to feel guilty about feeling those things or writing those things down. I just liked the separation," says Hadid. "I also have sketch pads where I'll watercolor-sketch, and sometimes I end up writing there too. I write on the back of receipts and keep those in a notebook. I'm not particular about it, and my journals are everywhere around the house. I just pick up whichever one is closest to me and write."

Gigi Hadid Jokes About Thinking Baby Khai, 9 Months, Is 'Most Genius Thing That's Ever Been Born'

Also in the interview, Hadid says she plans to introduce her daughter to horseback riding in the future, an activity the star calls "pretty spiritual" for her.

"Yes. She will one day definitely be on a horse," she says.

"They are some of the most intuitive animals," adds Hadid, "and to be able to sit on top of a being that's so much bigger than you ... You have to give in to the fact that the energies you give off, the horse is going to feel. So even if you're nervous, breathe through it. Talk to them. Use your eyes for where you want to go. There has to be mutual respect. That's why I love it. It's an animal that, if they wanted to, could destroy you in a second."

In August, Hadid said on Twitter that she was missing horseback riding during her pregnancy. "Early on I did (only walking tho) but not anymore. Missing it!!" she wrote in response to a fan who asked whether she was riding or "totally avoiding it" at the time.

"I still hang w em and bring them carrots," she replied to another fan who noted that the horses must "miss [her too]." 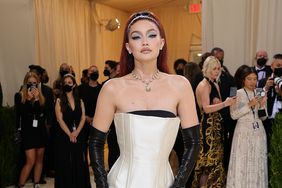