The pregnancy and sex of the baby were announced in November. In December, Giada discussed the surprise pregnancy with Redbook, and by February she said they had tentatively agreed on the name Jade. Giada’s due date had been this coming Thursday, April 3rd.

Thanks to CBB readers Kate, Kristen, B, Melanie, Alison, and SY.

Another photo of Jade is below, as well as Today’s video announcement, which has more images. 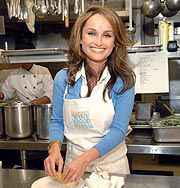 Giada De Laurentiis and husband tentatively agree on Jade -- but it may change!