Giada De Laurentiis and husband tentatively agree on Jade -- but it may change!

Now approaching the final month of her pregnancy, Food Network chef Giada De Laurentiis is feeling tired and wants to put her feet up.

I feelawesome in the morning, but around four or five o’clock my energycrumbles. No one evertells you the gross things. [laughs] There is nothing sexy aboutbeing pregnant. All you want to do is veg out. You get really, really tired — so tired that you can’t control it. Andyou feel major discomfort. There are very few positions that arecomfortable!

To ease her discomfort, the 37-year-old has been relying on warm, relaxing baths, followed by jasmine-scented homeopathic oil, which soothes her dry skin.

Your skin tends to get dry when you’re pregnant. [The oil] justmakes you feel good in your own skin.

And it’s a skin Giada never expected to be in. The pregnancy took Giada and husband Todd Thompson by surprise, and Giada reveals that her sense of freedom will be hardest to let go of.

My husband and I are very spontaneous. Wejust take off and do things like go helicopter snowboarding. [I never thought I would have a baby.] Todd’s been fantastic. He’s very nervous, butexcited.

Despite the nervousness, the anticipation is slowly and surely building for both.

[I can’t wait to meet] this being that’s inside ofme. Seeing what she looks like, passing on all the traditions. We’ll see [if she wants to cook]. I don’t want her tofeel like it’s expected of her.

Gearing up to greet their daughter, due April 3rd, Giada and Todd have one more big decision to make — her name. Giada is looking for something simple, but also with some cultural flair from her Italian heritage.

I don’t want to give her anall-American name, but a combination like ‘Valentina Thompson’ would bestrange. [We’ve tentatively agreed on ‘Jade,’ which is the Englishtranslation of ‘Giada.’ But we’re waiting until we meet her.] My parents named me ‘Giada’only after they saw my [green] eyes.

Thanks to CBB reader Elosie. 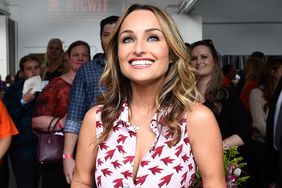 EXCLUSIVE: Giada De Laurentiis on Overcoming Challenges Post-Divorce: 'It's About Believing in Yourself'