"The only thing you can do is make sure they go out into the world with all the tools they need," says Dwyane Wade of raising five children

Gabrielle Union and Dwyane Wade are ready to change the world — but first, they've got to tackle potty training their spirited 2-year-old, Kaavia James.

And since the actress and NBA All-Star welcomed Kaavia via surrogate in 2018, the youngest Wade has racked up an impressive following on Instagram, and inspired her parents to write a children's book, Shady Baby, in her honor.

"People see themselves in Kaav," says Wade, 39, of the book, on stands May 18. "Some days you don't feel like doing your hair. And some days you want to give people shade."

Adds Union: "Shade is her super power because when Kaavia gives you a look, it's either you're not respecting her boundaries or something is happening that she doesn't like. The main takeaway is that she's free to be this amazing, dynamic, shady at times, loving at times Black little girl when the world has not been so kind to Black girls and women."

Indeed, Union and Wade, whose Wade Family Foundation supports initiatives including meal donation and LGBTQ+ health care, have been outspoken activists for years, most notably on causes that hit closest to home.

"My focus when it comes to any of my kids is to let them know who they are so that when other people's opinions about them are formed, it's not hitting them," says Wade, whose daughter Zaya, 13, is transgender. (The couple also have Zaire, 19, who along with Zaya are Wade's children from a previous marriage, Xavier, 7, Wade's son with an ex and Dahveon, 19, Wade's nephew.)

Listen to more of PEOPLE's cover story interview with Gabrielle Union and Dwyane Wade below on our daily podcast PEOPLE Every Day!

In her own childhood, Union says she didn't encounter those freedoms. "I was raised to assimilate," she recalls. "I was raised to conform. But we are raising our kids to know they are worthy because they exist. We don't want them to ever shape shift for anyone else's approval or acceptance. We want them to be free to be who they are."

Watch the full episode of People Cover Story: Gabrielle Union and Dwyane Wade on PeopleTV.com or on the PeopleTV app.

In keeping with their mission to spread awareness, the couple, wed since 2014, have recently teamed up with Merck and the nonprofit Vaccinate Your Family on a "Don't Skip" vaccine awareness campaign, and will launch a baby products line that will range from diapers and wipes, bath and body and skincare items specifically formulated for babies and children of color.

And in a world where members of marginalized communities find themselves every day, Union and Wade say they'll continue to speak out until lasting change is made.

"We're raising Black kids and every day in the world, they show us what we're thought of," says Wade. "You realize you can't protect them from everything. The only thing you can do is make sure they go out into the world with all the tools they need."

Adds Union: "It was a little infuriating to me that it took George Floyd's murder to inspire the bare minimum. Change and progress is like a frozen snail's pace. But we still have to persevere. The work is never going to end."

Gabrielle Union on Teaching Her Daughters to Love Their Hair: 'It Has to Start with Self-Love'
Related Articles 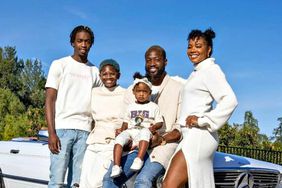