Update: The couple actually had a daughter named Brody Jo, not a son. People.com originally released incorrect information, but have since re-written their article.

Gabrielle had announced the pregnancy in June, saying that her due date was January 2nd. Laird revealed that they do not find out the sex of their children prior to delivery, because,

It’s probably the single greatest surprise we have in our lives, and to find out early for whatever reason — justifying the color of a bedroom or something — to me is kind of lame.

Nonetheless, Brody had her name chosen back in August — Laird mentioned at the time how much Gabby liked the name. While she was expecting, Gabby posed for the December issue of Pregnancy.

Thanks to CBB reader Karin. 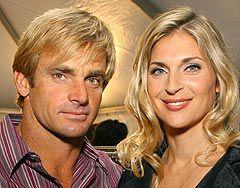 Gabrielle Reece on easing back into postpartum fitness

Gabrielle Reece Finds the Humor in Her Hectic Life