"I'm so thankful I have the opportunity to be home with them," Eva Mendes said of raising her two daughters

Eva Mendes is getting real about motherhood.

The 45-year-old Hitch star — who shares daughters Esmeralda Amada, 5, and Amada Lee, 3 with longtime beau Ryan Gosling, 38 — sat down with Access Daily on Thursday, where she candidly talked about the ups and downs of raising kids.

“It’s so fun and beautiful and maddening,” Mendes said of being a parent. “It’s so hard, of course. But it’s like that feeling of … you end your day, you put them to bed and Ryan and I kind of look at each other like, ‘We did it, we did it. We came out relatively unscathed.'”

“I’m so thankful I have the opportunity to be home with them,” the actress, who took a break from acting to focus her attention on her girls, said.

The mother of two revealed that she learns something new every day of being at home with her kids and most recently discovered that her youngest daughter’s sleeping habits have changed.

“I guess they go through a sleep regression, which nobody told me about until I looked it up,” Mendes said. “I was like, ‘Why isn’t my 3 year old sleeping?’ ”

Lack of sleep aside, Mendes gushed about her girls, explaining that they got very involved in a family garden she planted this summer.

“I’m a city girl but I just decided, ‘Wouldn’t it be great to start gardening and go pick the fruit from the garden?’ So we did strawberries, cucumbers, tomatoes … the girls went out to the garden every day and watered it. We were so excited,” she said.

When asked if either of her daughters had inherited the acting bug, the mom joked, “right now, they have every bug.”

“They just like a lot of arts and crafts, a lot of painting,” she said. “We have instruments around. They pick them up, and we can’t say they actually play anything, but it’s just a playful environment.”

But the girls’ future acting career isn’t the only thing Mendes is uncertain of.

The actress, whose last credited role was 2014’s Lost River, was equally vague about when she’ll get back to work, though she told Access she would like to collaborate with Gosling again in the future.

“He’s just such a creative genius. There’s always stuff going on there, but I would love to at any time,” she said. “I love it. I love it.”

The Place Beyond the Pines costars have been together since 2011, but nowadays, with two kids, date nights take “a lot of prep,” Mendes revealed.

“You got to make sure you have everything all lined up,” she told Access. “Luckily we have a lot of family support. A lot of family. My family lives here. His family comes in. They live in Canada, but they come in all the time and stay for a very long time, and it’s very welcomed. And so we have that support.”

The actress also explained the importance of self-care.

“It’s also about carving time out for yourself,” she shared. “It’s kind of scary that they’re really watching me every second and watching what I do. So if I put myself as a priority and I take time to self-care, it sends a good message and keeps me kind of sane.”

Back in April, Mendes told Women’s Health that having kids “was the furthest thing from [her] mind” until she met Gosling.

“Ryan Gosling happened. I mean, falling in love with him,” she said. “Then it made sense for me to have … not kids, but his kids. It was very specific to him.”

The star also gave insight into why she and Gosling work to keep their daughters away from the spotlight.

“Not only are we in the industry, but the whole fame component is super scary when you try to raise your kids,” she said. “What I try to emphasize is that I don’t let them see me put attention to how I dress. They’ve never seen me get ready for something; they’ve never seen me at work.”

“Which is fine, for whoever wants to do it that way, but the way I keep it normal is by not letting them see me in these situations,” Mendes added. “I’m just Mom. And I’m more than happy to just be Mom.” 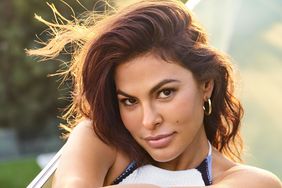 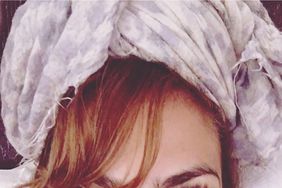 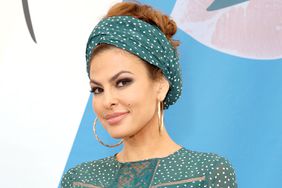 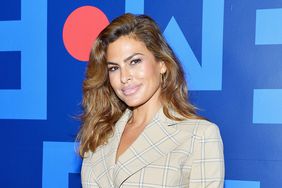 Eva Mendes Hints at Return to Acting as She Raves About Her Daughters: 'My Ambition Is Coming Back'