During a recent visit to Lopez Tonight, actor Eric Dane recalled his first - and last - foray into nursery design.

Give him credit for trying!

During a recent visit to Lopez Tonight, actor Eric Dane recalled his first — and last — foray into nursery design.

When wife Rebecca Gayheart was still pregnant with the couple’s daughter Billie Beatrice, 6 months, Dane was captured by photographers removing a large, Technicolor coat rack from their California home.

“You get a kid, you start impulsively buying things,” the Grey’s Anatomy star, 37, explains. “I found this coat rack and I thought, ‘It’s very colorful, maybe [Billie] could hang a hat on it or swing from it or something.”

“I showed up and said, ‘Honey look, it’s whimsical,'” he continues. “She said, ‘You want whimsical? Go back out the door you walked in.’ Two hours later, [I took it back]. I said, ‘Just sit with it, don’t decide now.’ She said, ‘Your career as a decorator is done.'”

The couple is seeing eye-to-eye on at least one thing — the war on germs!

Dane admits he thought he’d be a “let ’em get dirty kinda dad” but since baby girl arrived, he’s singing a different tune.

“The second you come into my house I show you the sink, the hand sanitizer, then I follow you around with baby wipes,” he jokes. “Because you don’t want the kids to get sick, right?”

There have been other changes on the home front as the couple adapt to a slower-paced way of life. The first-time dad concedes that while he kept his Porsche, he “got rid of” his motorcycle — and is now in the throes of baby-proofing.

“I had the baby-proofers over the other day, putting foam on the corner of the coffee tables and making walls and gates,” he reveals. “It’s very tough to get around my house now. When we were kids people were smoking … carseats were like a phone book, you know?”

As for baby girl’s name, Dane reveals that “Rebecca was convinced” they were having a boy so they settled on Billy, after Dane’s father. Once they learned that mom’s instinct was wrong, they simply decided to stay the course.

“I said ‘Great, we will name her after my father — Billie’… [and] Beatrice is after her grandmother.” 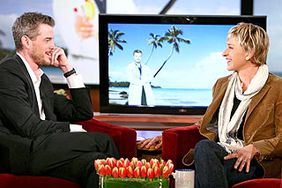 Eric Dane & Rebecca Gayheart Are Working On a Baby

Eric Dane: Why I Love My Wife Now More Than Ever 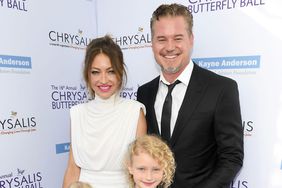