The 8½-year-old son of Liev Schreiber and Naomi Watts looked every bit his dad’s adorable mini-me (with a side of Mom’s signature blond hair) as he attended Sunday’s Emmy Awards alongside the six-time-nominated Ray Donovan actor.

For the star-studded evening, the little guy wore an Isaia tuxedo and bow tie to match Schreiber’s, along with J. Crew’s Kids’ Classic Wing Tips shoes in black, which retail for $118.

“The very dapper and downright divine Kai Schreiber!!!” Schreiber, 49, captioned a father-son photo ahead of the ceremony.

RELATED GALLERY: No Date, No Problem! Stars Bring Kids and Siblings to the Emmys Red Carpet

Proud dad Schreiber couldn’t resist sharing a few snaps to his Instagram account, writing of his partner in crime for the evening, “How lucky am I? #Kai #bestdateever” alongside a snap of his son from the car ride.

The Spotlight star wasn’t the only one to hit the jackpot Sunday evening. Kai got to meet Emmy-nominated Stranger Things star Millie Bobby Brown — and of course, Schreiber captured it on camera.

“Shut the front door!!! We can go home now,” he captioned the cute shot of the duo at the ceremony.

We Found It: The Cool Suits Angelina Jolie’s Twins Knox and Vivienne Wore to TIFF

FROM PEN: Naomi Watts Says She Had a ‘Psychic Premonition’ She’d Be the Mother of Boys

Schreiber and Watts, 48, have been snapped in amicable moments both with each other and their children (they also share 10-year-old son Alexander “Sasha” Pete) since their 2016 split, which followed an 11-year relationship.

“We’re parents together so we’ll be together for the rest of our lives no matter what and we’re very close,” Schreiber said of Watts in December. “Hopefully, that never changes and I don’t think it will.” 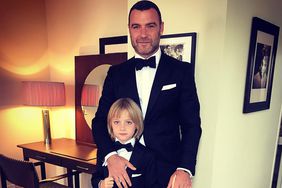 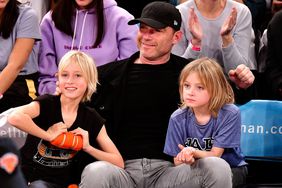