Elettra Wiedemann — the daughter of Isabella Rossellini and granddaughter of legendary Hollywood star Ingrid Bergman — just welcomed a new addition to the family.

The model and Impatient Foodie author, 37, gave birth to her second baby, son Viggo River Lane, on Monday, June 14, at 5:30 a.m., she announced on Instagram. Wiedemann is also mom to 3-year-old son Ronin, whom she also shares with her partner, Pretty Little Liars actor Caleb Lane.

"Our son, Viggo River Lane, was born this morning at 5:30AM 💙 Everyone doing great 🙏," she wrote alongside a pair of photos showing the newborn baby.

Rossellini, 68, congratulated her daughter on the arrival of her second baby, adding that the new addition weighed 8 lbs., 10 oz., at birth. "It's a boy! Viggo 8 pounds 10oz. The mother @elettrawiedemann and father @caleblaneinsta are doing well. We are all very HAPPY ❤️," Rossellini said in the caption alongside a photo of herself holding her grandson.

Bergman, who died on her 67th birthday in 1982, was a movie star known for classics like Casablanca, For Whom the Bell Tolls and Anastasia. She won three Academy Awards during her career. Rossellini was a model before becoming an actress, with memorable roles in films like Blue Velvet and Death Becomes Her.

Speaking with PEOPLE back in 2015 about Bergman, Rossellini said, "I would love to have more of my mother. She survived cancer for eight years. She worked until the end despite becoming increasingly sick and in pain. She was brave and strong until the end and died 'with her boots on,' as she used to say."

Honoring her mom for Mother's Day last month, Wiedemann praised Rossellini on Instagram, calling her a "veritable superwoman who is also kind, hilarious, brilliant, creative and so much fun. We love and appreciate you so much @isabellarossellini Thanks for being our mamma and Nonna and for all that you share with us and encourage in us."

In February 2020, Wiedemann told the Daily Mail about how the generations of women in her family shaped her.

"Strong, elegant women are on both sides of my family, maternal and paternal. They really taught me about simplicity and functionality. The women of my family don't think that in order to be elegant, you have to be in a gown with high heels. They think that a white shirt and black trousers are elegant. … They taught me about keeping things very simple." 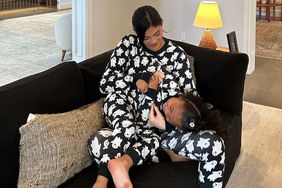