Oprah at Home with Gabrielle Union, Dwyane Wade & Their New Baby will air Saturday at 8 p.m. ET/PT on OWN: Oprah Winfrey Network

The journey toward welcoming their daughter Kaavia James wasn’t without its physical (and mental) roadblocks for Gabrielle Union and Dwyane Wade.

Opening up in an exclusive new interview with Oprah Winfrey — Oprah at Home with Gabrielle Union, Dwyane Wade & Their New Baby, airing Saturday on OWN — Union recalled how her hard-working personality made it difficult for her to give up the idea of carrying a child. (Baby Kaavia was eventually born via surrogate on Nov. 4.)

“I’ve just always been of the mindset — because this is what people tell you: ‘You work hard, you do the right things, you’re a good person, it will happen for you,’ eventually,” says the Being Mary Jane star, 46, who previously revealed in her memoir We’re Going to Need More Wine that she had suffered “eight or nine miscarriages” after infertility and failed in vitro fertilization treatments.

“I could not let go of this idea of creating this life within me … that tied me to [Dwyane], that he could be a part of, that the world could be a part of,” she explains, adding of her former mantra, “I’m not letting myself and all these people down. I need to be pregnant for everybody, including myself.”

The NBA star admits he struggled with watching his wife go through the process of putting her mind and body through the stress of trying to conceive.

“I’m watching her do things to her body and to herself that it’s getting to the point where it’s not healthy,” says Wade, 36. “And as I always told her, ‘I want this baby just as much as you do but I married you and you are the most important thing to me.’ ”

“So it came to a point where I started to feel a certain way about that because I didn’t want something to happen to her,” adds the Miami Heat player, who’s also dad to sons Xavier Zechariah, 5, Zion Malachi Airamis, 11, and Zaire Blessing Dwyane, 16. He also raises nephew Dahveon Morris, 17.

Becoming a mother for the first time at age 46, Union explains she didn’t really think seriously about having children of her own until she became a stepmom to Wade’s sons.

“I saw motherhood and parenthood with very realistic eyes,” she tells Winfrey. “It looked hard, when I wanted a life of flitting around the country and the lack of responsibility and all that.”

“Parenthood is sacrifice and being consistent and being present,” the Bring it On star adds.

Oprah at Home with Gabrielle Union, Dwyane Wade & Their New Baby will air Saturday at 8 p.m. ET/PT on OWN: Oprah Winfrey Network. 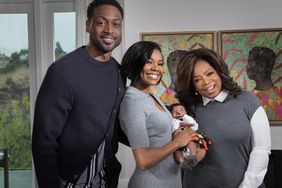