Dwayne Johnson is showering his daughter Tiana Gia with love in honor of her third birthday.

On Sunday, the 48-year-old actor and former wrestler posted a heartfelt birthday tribute on Instagram to his baby girl, whom he shares with wife Lauren Hashian.

"Happy Birthday to my sweetest lil' Tia Giana 💕💝🎂," Johnson wrote alongside a snapshot of the father-daughter duo. "Loving, kind, tenacious and tough (like your mama;) and my greatest joy is being your daddy. I always, 'got you.' "

"Now that she's finally starting to understand that daddy is Maui from MOANA, she has one very important question —'Daddy do you know AquaMan? 😂 #thisis3 #my💝," the Black Adam star added.

In addition to Tiana, Johnson is also dad to daughter Jasmine, 5, with Hashian, 36, and daughter Simone, 19, whom he shares with his ex-wife Dany Garcia.

Johnson often shares footage on social media of his time at home with his daughters. Last month, he posted an adorable throwback video with Tiana in which he taught her to tell herself a variety of positive affirmations in honor of International Women's Day.

While holding Tiana close to his chest, Johnson asked his daughter, "Can you say I'm a pretty girl?"

"I'm a pretty girl," Tiana adorably mumbled, as the Fast and Furious star went on to teach his daughter to call herself an "awesome girl" and a "very smart girl."

Johnson previously opened up about having all daughters in a candid Instagram post shared in February that featured a photo of the star walking hand-in-hand with Tiana.

"Every man wants a son, but every man needs a daughter," Johnson wrote. "All my girls have become the great equalizers in my life - I'm surrounded by estrogen and wouldn't have it any other way 😊. And man I hope she never gets tired of holding these big ol' dinosaur hands, though I suspect one day she will 🦖🤚🏾☺️."

Johnson has long been open about being a dad to all girls, even previously joking that he's unable to "make" boys. Back in December 2017, ahead of his third daughter's arrival, he told The Tonight Show's Jimmy Fallon all about his excitement for raising a third daughter.

"I've got strong swimmers, Jimmy," he told the host at the time. "I feel good. I was raised by women all my life, basically. And this is my third daughter. [I'm] surrounded by estrogen. Bring on the estrogen!" 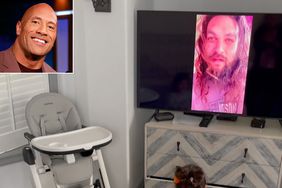