With the birth of daughter Carmen Noel on December 25th, new mom Dominique Moceanu tells People that she "doesn't think any Christmas can be topped now!" Although a favorite activity of the 26-year-old Olympic gold medal gymnast and her husband Michael Canales, 30, is to watch their daughter sleep — "We just stare at her. We can't believe she's ours" — they are amazed by her strength when awake. At only four weeks, Carmen started rolling from back to belly, a feat occurring in most babies after the two month mark and occasionally as late as 6 months.

D: It's pretty amazing she's so strong already. It takes two of us to hold her down to change her diaper!

M: I think she'll be a great gymnast. But if she wants to play piano, that's fine with me.

D: [But] coaching her would be the ultimate dream.

Carmen, as know as Gummy, because "when she smiles it's just a mouthful of gums" is now 10 weeks old. Dominique, who gained 41 lbs while pregnant, says she has lost half her baby weight by using a treadmill. Still, she's dealing with the bane of every new mom's existence — the flabby belly.

This pooch is hard to get rid of! 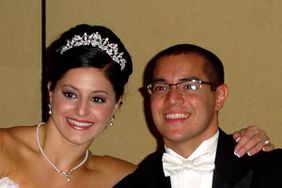