Numb3rs actress Diane Farr and hubby Seung Chung received quite a surprise 8 days into their summer honeymoon. The couple who wed on June 24th found out that they were expecting their first child together – a baby boy, due in February.

"We weren’t prepared for it to happen so quickly, but I had taken pregnancy tests with me on the honeymoon just in case, " she told OK. "We had talked about giving ourselves a year, but you never really know how long it’s going to take. It made me so happy that it worked out like this because when you’re over 30 you sometimes wonder if you’ve missed your window."

She says her husband was just as excited as she was, but maybe a little more shocked. "I think part of him feels like, ‘But we just finished that other giant project with the wedding.’"

The couple decided to wait at least three months before telling anyone about Diane’s pregnancy. "[Not telling] was tough since I wasn’t feeling so good," she says. "I almost blew it a bunch of times!"

Diane says her pregnancy hasn’t been as easy as she thought it would be. "My best friend was pregnant and she didn’t get sick at all, so I was assuming that I would breeze through the whole thing like her," Diane says. "For the first six weeks I was great, eating salmon every day, and then it hit me like a truck three days before I was due to go back to work."

Speaking about her plans to stay fit during and after her pregnancy, Diane has decided to go with Pilates. "When I got pregnant I needed a type of exercise that didn’t get my heart rate too high or make me sweat, since that made me queasy," she says, "I had all these fantasies about being the pregnant woman who jogs right up to her delivery date, but clearly I’m not!"

As for her show’s character, a pregnancy will not be written into the story line. "I’m carrying purses, clipboards and I’m always behind a laptop." 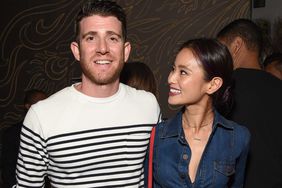 Jamie Chung and Bryan Greenberg Welcome Twins: 'We Got Double the Trouble Now'

Diane Farr on indulging, using a doula, a nanny, and more

Diane Farr talks about the 'slow burn' of motherhood

Diane Farr: My Daughter Was Bitten by a Rattlesnake