Charlie Sheen and Denise Richards share daughters Sami, 17, and Lola, 16, and a judge ruled Monday that he pay "zero dollars per month" in child support

Charlie Sheen no longer has to pay ex-wife Denise Richards child support, a court ruling that caught the actress off guard, a source says.

A judge made the decision in Los Angeles County court Monday, adjusting the child support payment to "zero dollars per month" commencing from August 1, 2018, according to documents obtained by PEOPLE.

Richards was not in attendance during the court proceedings. (On Instagram Friday, she wrote that she was traveling for work, explaining that "it's hard being away from home and my family.")

A source close to Richards told PEOPLE she was "blindsided" by the court date and ruling.

For more on Denise Richards and Charlie Sheen, and other top stories, listen below to our daily podcast PEOPLE Every Day.

"Charlie filed two years ago and kept pushing the court date, so Denise was very surprised that it happened yesterday while she is out of town filming. She was blindsided," the source said, further alleging, "Now he's manipulating the situation."

"Lola does not live with Charlie. She lives with both of her parents and stays with Charlie when Denise is out of town. When Denise is back, Lola will be with her," the source clarified. "This is very disappointing for Denise, but also not surprising. Charlie is pitting the girls against their mother, which is horrible."

An insider close to the situation, however, tells PEOPLE that Richards "has known about the court date for six months."

The judge's ruling comes weeks after Sami alleged in TikTok videos last month, as reported by Page Six, that she moved out of Richards' home and in with Sheen, complaining about being "trapped" at her mom's place. (The posts have since been made private.) The teen said she "finally moved out of the hell house, had a spiritual awakening."

The source clarifies that Sami has been living with Sheen since July, not April, as was stated in court.

"Denise loves Sami very much and Sami loves her. Denise is very saddened by the entire situation. She's a mother who wants to protect her kids," adds the source. "They need structure and rules and Charlie is very permissive. Denise just wants the best for them."

Reps for Sheen and Richards did not immediately respond to PEOPLE's requests for comment.

A source told PEOPLE last month that Richards "set normal rules that any parent would be setting," but Sami was defiant.

"She's a mom and a parent and there are rules. [Sami] didn't want to follow the rules," said the source, adding, "Charlie didn't support implementing Denise's rules. He has a different way of parenting and Sami decided to live with her dad. Denise loves her daughter very much and she's saddened by the situation."

The Real Housewives of Beverly Hills alum, who is married to Aaron Phypers, is also mom to daughter Eloise Joni, 10. Charlie has three other children from other relationships: Cassandra, 36, and 12-year-old twin sons.

Richards and Sheen met while shooting the movie Good Advice in 2000, but it wasn't until the actress guest-starred on Charlie's former sitcom Spin City in 2001 that a romance began. They married in June 2002. By March 2005, it was over, with Denise filing for divorce.

In 2019, Richards told PEOPLE, "I think that my daughters will tell you that I'm a strict parent."

She previously revealed she had installed security cameras outside her home to prevent Sami from going out to meet with boys without permission. "I definitely have rules and boundaries, and there's consequences," she continued at the time, adding that doesn't let her daughters "do whatever they want."

Back in March, Richards celebrated Sami's birthday on Instagram by writing, "Can't believe my beautiful baby girl is 17!!!! Time flies by so fast, so amazed the beautiful young woman you've become," alongside a photo of her.

"Although a part of me would give anything to have those years back when you were little. I cherish those precious moments," she added at the time. "I love you so much Sami girl. I'm so proud of you. You're beyond beautiful inside and out and so compassionate. I love you my Sami. Happy Birthday." 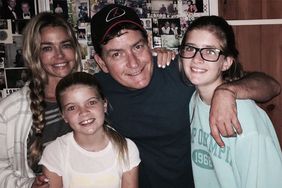