"This is a really special time," a pal tells PEOPLE. "She can't wait to introduce her to her friends"

That was the theme of a baby shower Denise Richards threw in Beverly Hills for her daughter Eloise Joni, whom she adopted domestically in June.

Famous pals including Tori Spelling, Lisa Rinna attended, and others, like Ali Landry, Nancy O’Dell and Mel B were expected at the party at the Montage Hotel, where guests sipped champagne and presented Richards and her daughter with gifts, including a pink Stokke stroller and baskets of baby clothes, plush toys and Baby JaR bibs, burpies and blankets.

The decor included pink and black flowers, inspired by the classic Eloise children’s book series, and a cake topper with a replica Eloise and her big sisters, Richards’s daughters Sam, 7, and Lola, 6.

“She’s so excited,” a pal tells PEOPLE. “She’s so in love with her new daughter. This is a really special time for her. She can’t wait to introduce her to her friends.”

Sam and Lola, who helped name their new sibling, share their mom’s joy. “They love having a little baby sister,” a source says. “They have welcomed Eloise with open arms.” 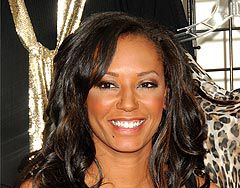