Dax Shepard and wife Kristen Bell are parents to daughters Delta, 5, and Lincoln, 7

Dax Shepard is leveraging his own past substance addiction in how he approaches the subject with his daughters.

On Monday's episode of his Armchair Expert podcast, the father of two revealed that when his two girls with wife Kristen Bell (Delta, 5, and Lincoln, 7) get older, "I am pro my children doing mushrooms at some point."

"There are a lot of different studies that have pretty conclusively shown that you have long-lasting creative advantages, right?" explained Shepard, 45, who celebrated 15 years of sobriety in 2019. "People who've done mushrooms have markedly more creativity that lasts."

"I'm gonna tell my girls to do shrooms and to smoke pot and to drink, and just don't do cocaine or opioids," he added. "If you don't do those two things, you'll likely be able to do all the other ones for the rest of your life. But if you get involved with those two, it's probably gonna end the party — or, at least, it did for me."

Shepard's guest, Rob Lowe, agreed with him but said the "wildcard" drug is Adderall, which is something his older son Matthew took while going through college and eventually passing the bar exam.

"That kid [wouldn't have passed] ANY of those tests, for sure, without Adderall. It's a great thing, but it's so easily abused, and [kids] are doing it, for sure," said Lowe, 56.

Shepard has been outspoken about his addiction, and his hard-won sobriety isn't something wife Bell, 39, takes for granted.

"I know how much effort has to be put into staying sober. I don't mean that to be like, I come home and see him shaking and looking at a whiskey ad or something, [but] there are different elements you have to deal with when you're staying sober," The Good Place actress told PEOPLE last year. "It's a ton of mental control and evolution."

Over their nearly 13 years together, Bell revealed that she has "always watched" her husband's feet, which have consistently "been running towards good goals," she said. "It's just impressive for someone to have been that mindful about something."

Every year on Shepard's sober birthday, Bell "spoils the hell out of me," Shepard added. "The nicest presents she's gotten me are always on my sober birthday. In fact, my real birthday … still haven't gotten a present!"

In raising their daughters, Shepard and Bell "pretty much tell them anything if they ask us" and "don't dumb it down," he told PEOPLE last fall.

When his daughter asked where babies come from, Shepard gave her a "very clinical sex talk." As Bell added in the couple's conversation with PEOPLE, "Halfway through the second sentence, she got bored and walked outside."

That same ideology goes for big subjects like death, which Bell said was "obviously the most terrifying one" because "you don't want to make them feel insecure or scared, but at the same time I don't want to be dishonest with her."

"So we said yes, and she cried for about 30 seconds," the Veronica Mars star explained of Lincoln's reaction to the answer she got after asking if she was going to die one day. "Then she was fine and she's never questioned it again." 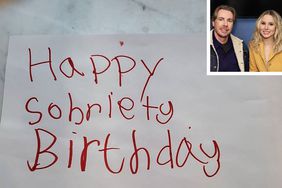