"The skin tone might throw her off a little bit," he says, adding with a smile, "But she likes Charlie and the Chocolate Factory, so she might just think I'm an Oompa Loompa."

Drew Lachey is ready to dive back into dancing.

The 98 Degrees singer, 36, — who is partnered with Anna Trebunskaya rather than Cheryl Burke for Dancing with the Stars‘ all-star season — calls ABC’s hit show, “a fun, energetic thing to be a part of.”

But much of his excitement about being on the program for the second time is having his little girl Isabella Claire be a part of the experience.

“In season two, my wife [Lea] was nine months pregnant with my daughter, who is now 6,” Lachey tells PEOPLE.

“They’re going to come out to L.A. for the entire run, for as long as I’m on. For me, personally, I need that balance. I need to have my family close by, so I can do the rehearsals, so I can do the show. Then I can leave it all and go home and be normal and be Dad.”

One thing the father of two looks forward to when he breaks away from his DWTS duties is “not [worrying] about whether it’s rhinestones or tulle, or spray-tanning or Fake Bake,” he says, jokingly. “Those are the hard, pressing questions you have to deal with on Dancing with the Stars.”

Adds Lachey, “I mean it just really, really weighs on you. So for me, I need to be able to go home and play with the kids and be real.”

The tanning is what the former mirrorball trophy champ expects to confuse his daughter the most.

“The skin tone might throw her off a little bit,” he says, adding with a smile, “But she likes Charlie and the Chocolate Factory, so she might just think I’m an Oompa Loompa.”

The bedazzled costumes, on the other hand, aren’t an anticipated concern for the star. 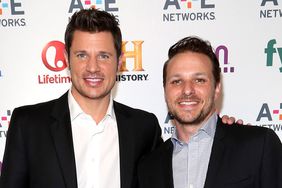 'Dancing with the Stars' Winner Drew Lachey Teases Brother Nick on His Scores: 'I Never Got 6s!' 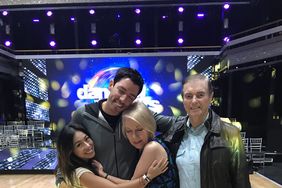