When it comes to their daughters, these celeb dads just melt. See our favorite famous pops with the little ladies they love. By Kate Hogan

Though he tried to resist it, Jason Bateman has become "one of those parents" when it comes to daughter Francesca Nora, 2½. "I'll show you a picture on my phone if you ask me to," he jokes of his little girl. "She's mine. And I love her."

The youngest of the Cruise brood, Suri, 3, seems to have dad Tom wrapped around her little finger. "She's hard to say no to, that Suri," says the actor, who's also dad to Isabella Jane, 16, and Connor Antony, 14. "She's so sweet."

As Hugh Jackman's only daughter, Ava Eliot, 3½, is a regular source of inspiration to her action-hero father. In fact, the actor credits his family's "unconditional love" with his acting success. "Frightening how in love with [your kids] you are," he shares of life with his little girl and son Oscar Maximillian, 9.

The model dad is constantly excited about baby Nahla Ariela, 15 months, and was even the proud subject of her first word. "She says 'papa,' which is the French version of [dada]," he gushes.

"I'm as protective of my family as any father and husband can be," explains Keith Urban of his fierce love for daughter Sunday Rose, 11 months. Though he's currently touring North America, the country star reserves space for his baby girl on his tour bus. "I love when [she's] here," he shares.

Though Tori Spelling always longed for a little girl, it seems she's surrendered daughter Stella Doreen, 1, to husband Dean McDermott. "She already bats her eyes and [Dean's] melting. Stella can do no wrong," says Tori. Dean is also dad to sons Liam Aaron, 2, and Jack Montgomery, 10.

Rocker-turned-"superdad" Joel Madden has been known to write songs about his little girl, 17-month-old daughter Harlow Winter Kate. "I can wholeheartedly say that he's the best dad I have ever seen," brags girlfriend Nicole Richie. "He's as good as my dad."

The funnyman may love to make moviegoers laugh – and at home, too, Adam Sandler is all about cracking wise with daughters Sunny Madeline, 7 months, and Sadie Madison, 3 (not pictured). Though the proud papa admits he's "not great at the bedtime stories," he plans to make kid-friendly movies in the years ahead.

As a divorced dad, Travis Barker truly values the time he has with kids Alabama Luella, 3½, and Landon Asher, 5½. "I stay with them the entire, entire time on weekends," says the Blink-182 rocker. "I'm obsessed with my children."

Seal and Leni, 5, share an extra-special bond: The oldest child of Heidi Klum, Leni isn't biologically Seal's daughter, but he's treated her as his own since day one. "Seal is a wonderful daddy," raves Heidi. "He never minded changing diapers, he loves to sing lullabies and he's always 100 percent there." The singer is also dad to Henry, 3½, Johan, 2½, and a baby-girl-to-be. 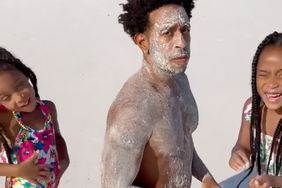 Girl Dads! Ludacris, Kevin Jonas, Bruce Willis and Other Celeb Fathers Who Have Only Daughters