Self -proclaimed lifelong bachelor George Clooney has been feeling the heat from his parenting Ocean’s 13 costars Matt Damon and Brad Pitt. According to OK, Brad and Matt have been telling George how much happier he would be if he married his long-time on/off girlfriend actress Krista Allen and they had a few kids of their own.

Both actors speak from experience, as they have both recently entered into fatherhood. Within the last year, Brad has welcomed daughter Shiloh with his girlfriend, actress Angelina Jolie and become a father to Jolie’s two older children, Maddox and Zahara.

And Matt has had a whirlwind few months himself. He married longtime girlfriend Luciana Bozan, and the two now have their own new baby girl, Isabella, as well as Luciana’s older daughter Alexa.

"Brad and Matt can’t stop talking about their babies and bragging about how cute they are… talking nonstop about feeding, changing and burping," a source told the magazine. "They both believe a darling baby would make George a happier person."

But it looks like the guys have their work cut out for them. In the past George has made several comments about his desire to remain single and childless. Just last October, the ladies man said, "There isn’t anything in me that wants to replicate."

"While George agrees that both Brad and Matt have gorgeous baby girls, he told his pals, ‘You can halt the baby campaign, fellas, because I ain’t birthin’ or burpin’ no babies!’," the magazine’s source said.

Meanwhile, Matt and Brad are remaining hopeful and persistent.

"Brad and Matt are both convinced George would make a great father, and Brad even taped a picture of Shiloh up on the mirror of George’s office and wrote in marker, ‘Awwwwwwww,’ trying to show George how adorable a baby can be," the source added.

Brad Pitt: Back to Work on 'Ocean's Thirteen' 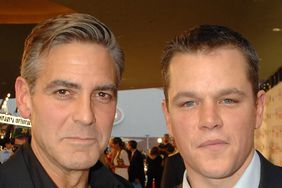 Matt Damon Couldn't Give Dad-to-Be George Clooney Much Parenting Advice: 'I Don't Know How Anybody Does Twins' 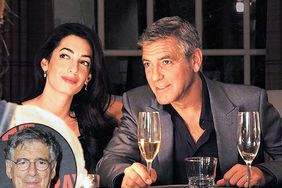 Which Costar Wants George Clooney to 'Have Some Children Already'?