Chris Pratt and Katherine Schwarzenegger, who tied the knot in June 2019, recently welcomed their first child together

Chris Pratt and Katherine Schwarzenegger Pratt are celebrating the birth of their baby girl!

The author, 30, and her husband, Chris Pratt, welcomed their first child together, a source confirmed to PEOPLE Monday.

Their newborn is The Gift of Forgiveness author’s first child while Pratt, 41, is already dad to 7½-year-old son Jack, whom he shares with ex-wife Anna Faris.

In honor of Pratt’s most recent birthday, which happened to coincide with Father’s Day, Schwarzenegger Pratt shared a loving tribute to her “wonderful” and “exceptional” husband.

“What an amazing year you’ve had and I know this year will be filled with more fun, adventure and love," Schwarzenegger shared alongside a collage of photos of the couple. "I thank God every day for you. blessed to live life with you, watch you grow, and one of the greatest gifts has been watching you be the most loving and fun father."

In February, just two months before their happy news was revealed, the Jurassic World: Dominion star opened up about why he knew his wife, 30, would make a wonderful mother.

“She’s, God willing, going to be a great mom one day. She’s got great parents, great siblings, she fills in all my many deficits,” he said during an appearance on E!’s In the Room.

“She has changed my life for the better in so many ways,” Pratt added. “My heart, my soul, my son I feel are all so safe with her. She’s a great stepmom.”

The couple, who first started dating back in June 2018, tied the knot during an intimate ceremony in Montecito, California the following year.

Sources previously told PEOPLE that the newlyweds were excited to “expand their family as soon as possible” following their nuptials.

Opening up about the profound impact fatherhood has had on his life, Pratt previously said that his career on screen pales in comparison to “being somebody’s daddy.”

“I’ve done all kinds of cool things as an actor. I’ve jumped out of helicopters and done some daring stunts and played baseball in a professional stadium,” he told Variety in 2014. “But none of it means anything compared to being somebody’s daddy.”

That same year, Pratt spoke with Redbook magazine about what it was like when Jack was born nine weeks premature.

“The baby was so beautiful to us, and I look back at the photos of him and it must have been jarring for other people to come in and see him, but to us, he was so beautiful and perfect,” he told the publication. “We were scared for a long time.”

Schwarzenegger Pratt has also found out firsthand how much love can grow when children are involved.

In a sweet Father’s Day post last year, the animal advocate revealed that she fell in love with her husband by watching him be a “hands on and loving father” to his son Jack.

“Instead of mostly enjoying solo, romantic dates, Chris’ son from early on was a very big part of their dating life,” an insider told PEOPLE in January 2019, highlighting the fact that it was important for the couple to include Jack in their early outings.

“Katherine is like a big kid and loves doing activities with Jack. She loves that Chris is a dad,” the source added. “Seeing Chris with Jack made Katherine positive from early on that Chris is ‘the one.’ ”

Everything to Know About Chris Pratt & Katherine Schwarzenegger’s Relationship

Schwarzenegger Pratt’s father has also been looking forward to becoming a grandparent.

“I don’t push it because I know it’s going to happen eventually. It’s up to Chris and her when they want to do that,” Arnold Schwarzenegger told Extra last year. “I’m looking forward it to, yes.”

After the couple’s happy news was revealed, the actor was quick to celebrate the “really exciting news” before joking about the child’s powerful gene pool.

"There's three gene pools here. You can do Kennedy, Schwarzenegger and Pratt,” he told host Jimmy Fallon back in May. "I mean, we can do anything. We can go and solve the Cuban Missile Crisis, we can go and kill Predators with our bare hands and we [train] dinosaurs. Think about it. That is a lot of power here." 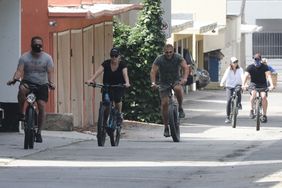 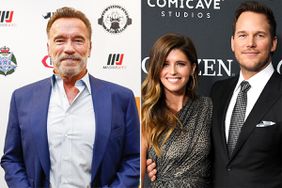 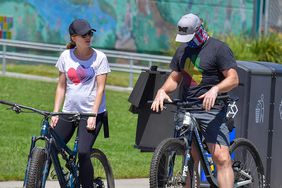