Actor Chris Noth, 53,and girlfriend Tara Wilson attend the Boom Boom Room event in Century City, CA on Saturday, January 12th. Their son is due on January 22nd, but Chris and Tara told vendors that they are going in for an induction on Wednesday, January 16th. A CBB reader overheard Chris saying that the baby was measuring large and there was a problem with Tara’s placenta — sounds like we may have baby news sooner than we expected! 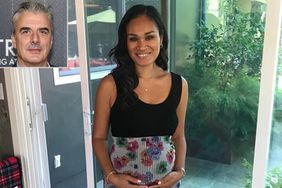