The actor explained that he wouldn't have the time to work as much as he would like to if he had kids, and that his wife Lauren Miller completely agrees.

"I wouldn't be able to do all this work that I like," Rogen said on an episode of The Howard Stern Show. "People are always like — it's something I think I was uncomfortable answering this before — but they were like, 'How do you do so much?' The answer is I don't have kids. ... I have nothing else to do."

As for Miller, whom he wed in 2011: "I would say she wants kids less than I do. I could probably be talked into it; she's like no."

Cyrus revealed why she's not pursuing motherhood in a candid interview with Elle. Looking at the issue broadly, the singer wants to fight back against general expectations that women should make reproducing a priority.

"We're expected to keep the planet populated. And when that isn't a part of our plan or our purpose, there is so much judgment and anger that they try to make and change laws to force it upon you — even if you become pregnant in a violent situation," she said. "If you don't want children, people feel sorry for you, like you're a cold, heartless bitch who's not capable of love … Why are we trained that love means putting yourself second and those you love first? If you love yourself, then what? You come first."

When it comes to making her own decision, Cyrus is eschewing the idea of having children until major environmental changes happen. "We're getting handed a piece-of-s--- planet, and I refuse to hand that down to my child. Until I feel like my kid would live on an earth with fish in the water, I'm not bringing in another person to deal with that," she told Elle.

The spouses of more than 10 years are happy to remain a party of two. "I think I would [like to have kids]. But that's not enough to have kids. I love kids. But that's such a big commitment," DeGeneres said on the TODAY show in 2015. "And it seems long-term. It seems like a commitment that you have to stick with. And I just don't know if I can — it's too risky. Like, what if I don't like the kid? What if it turns out that it's not as cute as I wanted, or as talented? I'm going to compare it to all these kids that I have on the show that are so smart and so funny."

De Rossi has also opened up about why children don't fit into their life plan.

"There comes some pressure in your mid-30s, and you think, 'Am I going to have kids so I don't miss out on something that other people really seem to love? Or is it that I really genuinely want to do this with my whole heart?' I didn't feel that my response was 'yes' to the latter," she told Out in 2013. "You have to really want to have kids, and neither of us did. So it's just going to be me and Ellen and no babies — but we're the best of friends and married life is blissful, it really is. I've never been happier than I am right now."

Aniston said that she's always found the prospect of having kids "quite honestly, kind of frightening" while talking to Elle in 2018.

"Some people are just built to be wives and have babies. I don't know how naturally that comes to me," the actress added. "Who knows what the future holds in terms of a child and a partnership — how that child comes in ... or doesn't? And now with science and miracles, we can do things at different times than we used to be able to."

Aniston also addressed the relentless pregnancy speculation that has followed her over her years in the spotlight in a scathing 2016 essay published by the Huffington Post.

"We don't need to be married or mothers to be complete. We get to determine our own 'happily ever after' for ourselves," she wrote. "Yes, I may become a mother someday … But I'm not in pursuit of motherhood because I feel incomplete in some way, as our celebrity news culture would lead us all to believe. I resent being made to feel 'less than' because my body is changing and/or I had a burger for lunch and was photographed from a weird angle and therefore deemed one of two things: 'pregnant' or 'fat.'"

Winfrey told Good Housekeeping U.K. that the experience of running her Leadership Academy for Girls in South Africa was a "perfect" fit for her since she "didn't want babies."

"I have 172 girls, and 20 are in college in the United States and use my home as their home base," she said in the 2017 interview. "It is more rewarding than I would ever have imagined. I was doing this to help them, but it has brought a light to my life that I can't explain ... When people were pressuring me to get married and have children, I knew I was not going to be a person that ever regretted not having them, because I feel like I am a mother to the world's children. Love knows no boundaries. It doesn't matter if a child came from your womb or if you found that person at age two, 10 or 20. If the love is real, the caring is pure and it comes from a good space, it works."

"I don't really want to have kids," the GLOW star told The Sunday Times Magazine in 2018. "It's great because I don't worry about when I should get pregnant — between seasons, while we're shooting the show — I don't think about it every day."

"It would be nice, but I think of all the things that would be so stressful. I think about how much we're involved in our cats' lives," she added of herself and husband Dave Franco. "Oh my God, if it was a child!"

The couple, who wed in 2003, talked to GQ about their family planning in a joint 2017 interview. "I never had a burning desire to have children," Mullally said. "But then I met Nick, and I thought 'This is the only person I'd do this with.' So we tried, but I was a little long in the tooth for that sort of thing. But we didn't turn it into a soap opera. We tried for about a year or so, and it didn't happen, and took that to mean it wasn't meant to be."

The Will & Grace star also thinks being childless may have helped their marriage endure. When asked what advice she would share with newlyweds, she said "'F---' seems like it's key. We have a two-week rule. We're never apart for more two weeks. Just not being separated for Jurassic periods of time seems to help. And no children probably helps a lot."

Playing a mom on TV is about as far as the Black-ish star wants to go, thanks. "I'm constantly asking myself questions, reminding myself, 'Are you making that decision for you or someone else?'" Ross told The Sunday Times in 2018. "The husband and the babies are the expectation of what's supposed to happen at a certain point, and people fall back on, 'Well, that's the point of the human species, procreation.' And I'm, like, 'I think there are a lot of babies, isn't that part of what's going wrong, there's too many?' Some people could be working on the world being a better place, or just being happy." 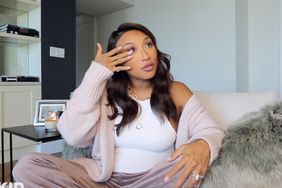