I was selected by Whitney Matheson who writes the Pop Candy blog for USA Today, as one of her top 100 people of 2006 (I’m #94). Our interview is published here.

She asked me why I think so many people love celebrity babies.

Well, there’s a couple reasons for that. It’s something that’s sohumanizing … Being a parent is such a basic sort of thing, and thelove that you feel for a child is something that’s universal. It’s sortof a universal milestone that’s always pretty much going to be thesame, so people really identify with celebrities (when they becomeparents).

The other thing is it kind of humanizes celebrities. Whencelebrities are pregnant, a lot of them let themselves go for the firsttime in their public lives. It’s really interesting for people to see acelebrity put on 70 pounds in less than a year. We normal people getfat all the time, but then we get to look at Katie Holmes looking all bloated and uncomfortable, and we say, "You know what? She’s no better than I am."

A Day in the Life of CBB: Shannon tells us about her day as a Celebrity Baby Blog senior contributor 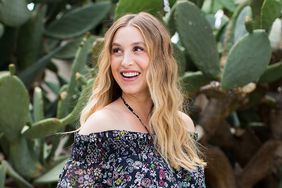 Whitney Port's Blog: The Excitement of Finding Out We Were Pregnant - Followed By a Tough First Trimester