Halloween is looking a bit different this year, but these celebs are making sure that there's no shortage of cute kid costumes

Kate Hudson's daughter Rani Rose had our ideal night: "Partied hard, out by 7."

Hilary Duff's daughter was a pink baby shark for Halloween and looked too-cute surrounded by pumpkins.

Ciara and Russell Wilson think son Win is "the sweetest widdle pup" - and we have to agree.

Christina and Ant Anstead's son dressed up as a baby vampire for his Halloween outing with his parents.

Bachelor alum Bekah Martinez had a memorable Halloween with her little Beetlejuice.

Kate Upton and Justin Verlander were thinking happy thoughts with their little baby Tinkerbell in tow.

She's super-cute, so it's no wonder Cardi B and Offset's daughter Kulture Kiari went as Wonder Woman.

Her mom captioned a sweet video of Kaavia rocking her costume, "Signed, Sealed, Delivered 📬📨💌" She added the hashtag, "#SaveUSPS" at the end.

"I really do hope the lion sleeps tonight 🦁," Gabrielle Union joked of her and Dwyane Wade's daughter Kaavia James. She added, "I cant take the cuteness 😫 👶🏾."

True to his name, Lea Michele's son Ever Leo was a tiny lion.

Memphis and Navy helped their parents Jason Aldean and Brittany Kerr pull off an awesome Tiger King family costume by being a tiger and Carole Baskin respectively for a spoof of a Joe Exotic music video.

Amanda Kloots captioned this photo of her son Elvis, "One of Elvis's Halloween costumes - Petite Elvito!"

Molly Sims and Scott Huber scared up some stunning family costumes as vampires and corpse brides.

Cooper and Scarlet Hefner dressed as Velma and Shaggy from Scooby Doo, and dressed their daughter Betsy as the titular pup!

Jade Roper Tolbert's costume is out of this world! Her baby bump served as the moon, while her son, Brooks, was an astronaut.

Mom Jamie Lynn Spears said it best: "These 2 are certainly in a 'LEAGUE OF THEIR OWN'!"

Kevin Jonas' daughter celebrated her birthday just a few days before Halloween on Oct. 27, and dressed as a sweet little bunny!

Bachelor alum Bekah Martinez posted a sweet photo of her daughter Ruth as an '80s aerobics instructor. She captioned the snap, "Just a material girl in a material world."

Stormi Webster and True Thompson got dressed up for a family pumpkin painting day! Khloé Kardashian's daughter, True, was dressed as a cat, while Kylie Jenner's daughter, Stormi, dressed as Rapunzel from Tangled.

They're off to see the wizard! For their first Halloween as a family of four, Jamie Otis and Doug Hehner dressed up with their kiddos, Henley "Gracie" Grace, 3, and Hendrix Douglas, 5 months. Otis dressed as Dorothy, while Gracie was the Wicked Witch of the West, Hehner was the Tin Man and Hendrix was the Cowardly Lion.

Catherine Guidici and Sean Lowe's kids dressed up as different animals, with Samuel as a bear, Mia, a panda and Isaiah, a lion!

Rapper Drake's son Adonis — whom he shares with Sophie Brussaux — is out of this world as an astronaut!

Eva Amurri kicked off spooky season by dressing her family as vampires. Amurri wrote on Instagram that it is a "family Halloween Costume You COUNT Refuse!!!"

Amurri's family also dressed up as 101 Dalmatians characters, and Marlowe is, as Amurri puts it "an entire dang mood" as Cruella de Vil.

Sometimes being at home with three kids can feel like a circus! Amurri leaned into the chaos and dressed Major, Marlowe and Mateo as circus animals, with herself as the ringleader.

"My lil punkins with their little pumpkins! 🎃👻☠️🧡🖤," Vanessa Lachey captioned a silly video of her kids dressed as skeletons.

Kandi Burress got the Halloween fun started early dressed up as a cheetah, while her son Ace's costume incorporated a mask and daughter Blaze was a little kangaroo!

Nikki Bella's newborn son celebrated his first Halloween by dressing up as the most adorable Star Wars character in the galaxy: Baby Yoda! 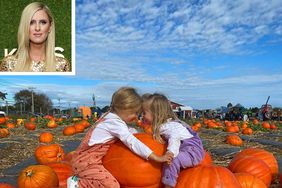