Say hello to the celebrity newborn babies of 2019

"Truth is I had no idea I was capable of loving anything like this before you arrived. You wonder if that's just something people say, but it's as if the chemical makeup of my entire body and soul changed the minute we met," Mitchell wrote on Instagram a few weeks after Atlas's birth announcement.

Atlas's birth comes after the You star revealed in January that she had suffered a miscarriage at 14 weeks gestation in 2018.

The Real Housewives of Potomac star is officially a new mom!

"Michael and I are overwhelmed with joy and love," Ashley told PEOPLE exclusively of her son, who weighed in at 8 lbs., 1 oz. "Dean is absolutely perfect. We couldn't be happier."

"We are simply overjoyed that Baby Reece came into this world today healthy and happy!" Charleston and Thomas told PEOPLE. "We have never known love like this!"

Their baby girl Isabella Brave Harper Collins made her debut at 9:27 p.m. on June 7, weighing in at 7 lbs. and measuring 20.5 inches long.

"With two middle names like her Southern mama and deep brown eyes like her charming dad, she is oh so loved more than she will ever know," Grace wrote on Instagram of their new bundle of joy.

The Fantastic Four costars Mara and Jamie Bell welcomed their first child together recently, according to the new mom.

"We had a baby a couple weeks ago … Here are her feet 💕," Mara captioned a snapshot of her newborn daughter's tiny toes.

The baby girl, whose name has not yet been announced publicly, is the first child for Mara while husband Bell shares a 5½-year-old son with ex-wife Evan Rachel Wood.

The Summer House alumna and husband Brad McAtee welcomed their first child together, a son named Dean Hudson McAtee, on May 24 at Scripps Encinitas Hospital in California.

Dean was born at 9:53 a.m. PT and weighed in at a healthy 8 lbs. 7 oz., measuring 20.5 in. long. The boutique owner and lifestyle blogger's twin sister Lauren Wirkus told PEOPLE the newborn "is pure perfection." Lauren added that "it was a very emotional but incredible labor experience for Ashley," as her husband, siblings and mom were all present for the delivery.

The royal couple shared their happy news on May 6 via @SussexRoyal, their new Instagram account that they launched on April 2.

"The Duchess and baby are both healthy and well, and the couple thank members of the public for their shared excitement and support during this very special time in their lives. More details will be shared in the forthcoming days."

Two days later, the new parents stepped out to introduce their sweet son and announce his name: Archie!

The actress and comedian welcomed her first child with husband Chris Fischer on May 5. She announced the big news on Instagram the next day alongside a hospital photo of herself and Fischer with their newborn son.

"10:55 pm last night. Our royal baby was born," Schumer captioned the photo of Fischer giving her a kiss right above her cheek.

The caption was no doubt a nod to Meghan Markle and Prince Harry, who welcomed their first child - also a baby boy - hours later, on Monday.

There's going to be another meatball down the shore this summer! Jersey Shore star Cortese and husband Christopher Buckner welcomed their first child, son Christopher John "CJ" Buckner, on Jan. 5. Their new baby boy weighed in at 6 lbs. 8.5 oz.

"Uhg mommy and daddy love you so much CJ," Cortese shared on Instagram. "youre our everything 🌎 i never thought i could love Chris anymore than i did until i saw him hold CJ ❤️."

90 Day Fiancé: Happily Ever After? season 3 mama Mayfield and hubby Russ welcomed their first child, a son named Axel, on New Year's Day. Baby Axel measured 22 in. in length and weighed in at 7 lbs., 5 oz., the couple revealed to PEOPLE exclusively alongside their little bundle of joy's first photo.

"We were hoping for a Christmas baby, but ended up with a New Year's baby, and we wouldn't change our experience for anything else," the new parents told PEOPLE, with Paola calling her son's birth "an amazing way to start a new year."

The singer and her partner, guitarist Javie Young-White, welcomed their first child, daughter Adeya Nomi, in late March, Kehlani announced in an Instagram post on March 25.

"this weekend our angel arrived healthy & perfect in every way in our bathroom at home," Kehlani wrote alongside a photo of what appears to be a baby blanket. "unmedicated homebirth was the absolute hardest yet most powerful thing i've ever done. thankful beyond words. in love beyond comparison."

"I can't find the perfect words to describe how madly in love I am," Bechrakis wrote on Instagram. "I am forever grateful...my babylino, that you chose me to be your Mommy."

The former Today host announced the birth of her new baby boy Moses with husband Steven on Instagram on April 25.

"Moses & Mama!! I can't wait to introduce y'all to my #sonshine," wrote Hall alongside a photo of herself wearing a hat with her little one's name on it.

Hall finished off the post by giving a sweet shoutout to her husband. "Photo credit: Dad who can't stop crying tears of joy. Thank y'all for the love and support. It got us here."

What an incredible moment for Shahs of Sunset star Javid and husband Tommy Feight, who welcomed their first child together on April 17, her rep confirmed to PEOPLE. The stars named their son Shams in honor of Javid's late father, while the baby's middle name, Francis, is after Feight's late mother.

Wife to country singer Cody Webb was overjoyed to welcome their first child, a baby girl named Josie Layne, on April 14, the new parents revealed exclusively to PEOPLE. She arrived at 3:36 p.m. local time in Nashville, Tennessee, measuring 17 in. long and weighing in at 6 lbs., 5 oz.

"We've heard people say there's no feeling like this in the world, but it's truly indescribable until you have felt it firsthand," Webb told PEOPLE of new parenthood. "This little girl has no idea how many adventures she has ahead, and we couldn't feel more blessed that she is here and healthy. God is good."

"What a time to be alive! Porsha and I are so happy and blessed to announce the arrival of our daughter, Baby PJ," the Dish Nation host and McKinley told PEOPLE. "We couldn't have imagined a more magical moment!"

The Shahs of Sunset alumna kept her pregnancy off of social media before announcing the happy news on April 16 that she'd welcomed a "little miracle Boy" on Feb. 23. In her announcement, Parido - whose divorce from ex-husband and former Shahs costar Mike Shouhed was finalized in June 2017 - also opened up about her emotional journey to motherhood, after years of believing she was unable to get pregnant due to the "high doses of chemotherapy" she had received to treat her leukemia at age 15.

"God had other plans for me. The level of shock and disbelief I had when I found out I was pregnant naturally was unimaginable," Parido recalled.

The new mom concluded, "I contemplated never posting about it and carrying on but IM A MOM, I have a son, a beautiful little miracle who I'll cherish the rest of my life and to not share this would be not sharing me." 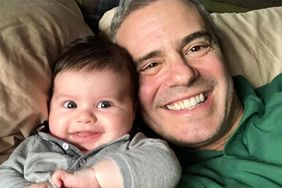