Oh, Baby! All the Celeb Parents Who've Shared Stories About Conceiving Their Kids

From Alicia Keys to Victoria Beckham, these stars made sure we get the whole stories of their kids' lives

In her autobiographical book More Myself, the mom-of-two opens up about now-husband Swizz Beatz whisking her off on a romantic trip to Hawaii, where she believes they conceived son Egypt, 9.

"'Open it,' Swizz said as he slid the box toward me. I lifted the cardboard flaps and looked inside to see several large canisters. 'I've always wanted you to be my canvas,' he whispered. The canisters were full of body paint, in every vibrant color imaginable," she writes about a gift he presented her with during the getaway. "Later, stroke by stroke in the shadows of dusk, he turned me into his masterpiece, covering me in swirls of yellows, reds and purples. Never have I experienced anything more sensual. Which is why, when I missed my period a few weeks later, I wasn't exactly surprised. As that winter gave way to spring, we relished two pleasures: the engagement and the pregnancy."

The musicians are also parents to son Genesis, 5.

Sitting down with Motherlucker for their "Got a Sec?" series, Duff admitted that daughters Lulu Gray, 1, and Ryan Ava Erhard, 4, have cocktails to thank for their existences. "Both stories involve alcohol. It's so funny because everybody stops drinking to get pregnant, but I think that's how everybody gets pregnant, is alcohol," she joked. "Ryan was a surprise. [My fiancé Matt Rosenberg and I] had been engaged and had been planning our wedding and we went on vacation to Hawaii. We had too many Mai Tais, and then we got Ryan," Duff continued. "Lulu actually came about because our parent mixer at preschool was hosted at one of my girlfriends' houses. They had a margarita bar. Again, with the alcohol, and that's how I got Lulu."

The Invasion of Privacy rapper and husband Offset welcomed daughter Kulture Kiari in July 2018. During an appearance on The Ellen DeGeneres Show, she joked that the sexy moves she broke out for her Coachella performance were responsible for the pregnancy. "I was just trying to show the world how I got pregnant in the first place," the star said about clips of herself twerking and dancing on the ground at the festival. "Like that, that's how it happened. That's where I [was] that day," she added about one pose.

Cardi also confirmed she knows exactly when her baby was conceived while talking to The Breakfast Club. "No, it wasn't planned. It was just one night … it was a good night … that one night, it had to be that night," she said.

The Fixer Upper star got very detailed when he announced he and wife Joanna Gaines were expecting their fifth child together. "You might recall a few months back.. the ever amazing, ever romantic @JOHNNYSWIM was in Waco. And they put on a little too romantic of a concert.. anyways, one thing led to another, & we are officially pregnant. And I could not be more EXCITED!" he tweeted.

In a 2014 interview with the Italian magazine La Nazione, the rapper shared his thoughts on when he believed he impregnated wife Kim Kardashian West with their first child, North, 6. "I adore Florence. I love Italy and the Italian lifestyle," he said. "To tell you the truth, I already came to the banks of the Arno [river] with Kim last year, just the two of us, incognito. And I think that our daughter North was conceived here among the Renaissance masterpieces." The Wests are also parents to daughter Chicago, 2, son Saint, 4 and son Psalm, 10 months.

Contrary to the widespread misconception (get it?) that the designer and husband David Beckham's eldest son was made in N.Y.C., the former pop singer revealed that he's of Danish origin. "I became pregnant in Denmark. We were on tour with Spice Girls and had come to Copenhagen. David visited me and yes ... so it happened. I figured it out a couple of weeks later when I was in New York," she told a Danish magazine about the beginning of 21-year-old son Brooklyn's life.

Shortly after the birth of Blue Ivy Carter, now 8 years old, JAY Z released the song "Glory," in which he hints at the place he and Beyoncé joined forces to create their first child. "The most beautiful-est thing in this world/ Is Daddy's little girl/ You don't yet know what swag is/ But you was made in Paris/ And mama woke up the next day/ And shot her album package," he raps on the track. The powerhouse couple later welcomed twins Rumi and Sir in June 2017.

Smith dipped his toe into TMI territory while honoring wife Jada at VH1's Dear Mama celebration in 2016. "Just watching the piece with the kids it just takes me back to when we made them. Can't help but think about that," he said in his speech, mentioning daughter Willow, 19, and son Jaden, 21. "It's just amazing. It's like you take Jada Pinkett Smith and an obscure town in Mexico and some tequila and you end up with great kids!" The actor is also father to 27-year-old son Trey.

Griffith's daughter, Dakota Johnson, relayed the story of her conception while hosting Saturday Night Live. "It's actually really incredible that I'm standing on this stage right now, because in December of 1988 my mother stood in this exact spot and hosted SNL," the 50 Shades of Grey star revealed in her monologue. "Right after the show my father got down on one knee and he proposed to her for the second time, and exactly nine months later I was born. So I must have been conceived that night after the show or maybe even during the show."

Sims opened up about her fertility journey in a 2016 video for her YouTube channel. "I decided to freeze my eggs before I met [husband Scott Stuber] ... The maternal clock all of a sudden just started happening," she shared. "We ended up freezing [embryos] about nine months before we got married in September of 2011." The couple ended up not needing to turn to the saved embryos to grow their family. "Honestly I got pregnant on my honeymoon!" Sims continued. "I think because we had froze, and because I had in the back of my mind a safety blanket - a safety net - I got pregnant." Stuber and Sims are now parents to kids Brooks, 7, Scarlett, 5 and Grey, 3. 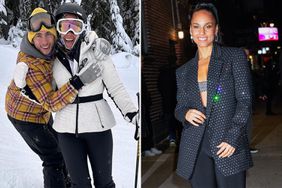 Alicia Keys Conquers Fears on Family Ski Trip: 'It Forces You to Live on YOUR Edge' 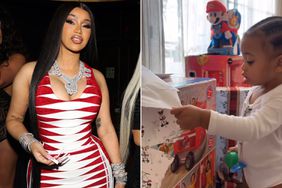 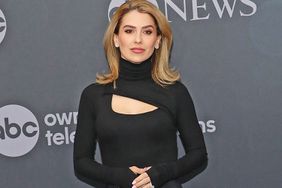 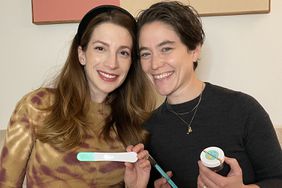 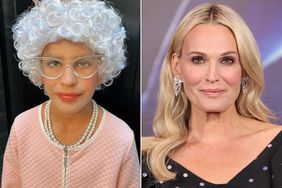 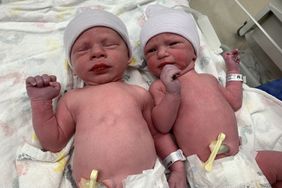 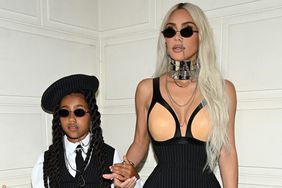 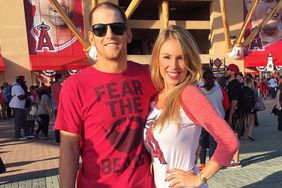 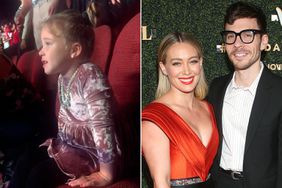 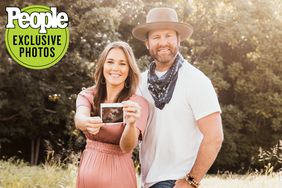