The country star's tot was fast asleep in the cute pic

Carrie Underwood‘s son Isaiah Michael may just be 3 months old, but he’s already scored some time with her band! (And he was practically born with a hockey stick.)

“Isaiah’s first band rehearsal … as you can see he and his daddy were totally into it!” the country star, 32, captioned a Saturday photo of husband Mike Fisher with their son, who was sporting a pair of oversized blue headphones — presumably for the noise.

They looked like they were working: Both boys are sound asleep in the pic.

Underwood, who gave birth in February, was preparing for Wednesday’s CMT Music Awards performance, her first since welcoming her son. Pregnancy is “such a miracle and such a beautiful thing,” she told PEOPLE days before her son’s arrival.

Soon after, Fisher, 34, added, “We’re definitely blessed to have him join us in our lives. There’s no better feeling.” 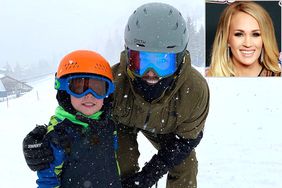