CARES and Baby B'Air: Airplane Safety for Babies and Toddlers

If your child will have their own seat, and they are over a year old, a relatively new product on the market fills a void. CARES ("Child Aviation REStraint System") from Kids Fly Safe is a belt and buckle system that attaches to the airplane seat belt and seat. The only FAA-approved non-car seat safety restraint for all phases of flight for children over one, who weighbetween 22 and 44 pounds (usually between 1-4 years) and in their own seat, it protects your precious cargo by restraining their torso to the seat and not just their waist. If you’ve ever had to schlep a car seat for a plane ride, you will definitely want to get CARES.

We used it when we traveled to Las Vegas and San Francisco this fall. At first, Anya wasn’t thrilled with the idea of getting strapped to the seat, but then again, she didn’t exactly love having to sit in her car seat either. (She’d rather sit on our laps!) It was very easy to install- you need to ask the person sitting behind you to lower their seat tray for a minute while you put the red part of the belt around the seat back and tighten it, and then again when you have to remove it. It doesn’t affect the seat tray so they have no cause for concern. Then you adjust the black straps- threading the plane seat belt through two loops on the bottom and adjust the height of the chest clips. To your child, it will look and feel like their car seat. What I love about it is how lightweight and compact it is (1 pound, fitting in a 6" bag). So even if you haven’t purchased a seat for your child (if they’re under 2, you aren’t required to buy one), you can take this with you and cross your fingers that you’ll have an empty seat next to you. In the past, we’ve schlepped the car seat with us and waited to board until the last minute. Because airlines have a tendency to overbook flights, it’s rare to get an adjacent empty seat but if you are really nice to the flight attendants before boarding, they will try to help you out. Therefore, it’s much easier to schlep the small CARES belt and possibly not use it instead of schlepping a carseat through the airport and end up having to gatecheck it.

It recently won one of only 8 Good Buy Awards for 2008 from the Good Housekeeping Research Institute, out of more than 2,000 products tested. Check out the January 2008 issue of Good Housekeeping on sale mid-December, where inventor Louise Stoll’s products and story, will be showcased. It’s also won the National Parenting Center 2007 Seal of Approval, Mr. Dad Seal of Approval, iParenting Media Award and The Toy Man eChoice award. Best of all, more than 15,000 CARES have been sold.

Louise, a transportation-savvy, safety-conscious grandmother from Vermont, was inspired to find a hassle-free and portable solution to carting car seats on airplanes that would enable youngsters to be as safe flying as they are riding in cars. Although she had no technical engineering or design experience, Stoll knew that the weight and bulk of car seats were exactly the opposite of what was needed. She also knew, from years of working in the U.S. Department of Transportation, that the airplane lap belt alone did not protect young children. Her 6 year labor of love finally hit the market in 2006 after partnering with aircraft seatbelt manufacturer, AmSafe, and received FAA certification. To date, The UK, Australia, New Zealand and Singapore have approvedCARES use in their countries. Canada is pending and the rest of theEuropean Union is in process.

This safety device weighs just one pound, fits in a 6" sack, and will run you $74.95. Visit www.kidsflysafe.com to learn more or to order.

For infants sitting on your lap

When we flew to Amsterdam when Anya was just 4 months old, KLM provided us with a lap belt that looped through mine, but in the United States, there’s nothing. Isn’t it crazy that airline flight attendants are always checking tomake sure you’re wearing your seat belt but the fact that your infantis just sitting on your lap doesn’t bother them (or the airline or theFAA) at all?

Baby B’Air is an FAA-approved quilted cotton flight vest for your 6 month old-2 year old child. You slip it over their head and snap the buckles firmly around their torso and crotch and then feed your belt through the loop that attaches to the back of the vest. This tethers your child to you so if there’s turbulence, if your arms loosen. For some reason, it’s not approved for taxiing, takeoff and landing, but the rest of the flight is where there’s greatest chance for turbulence. Available for $29.95 at OneStepAhead.com and other sites and stores.

Sponsor: Flying with your young child? You need CARES 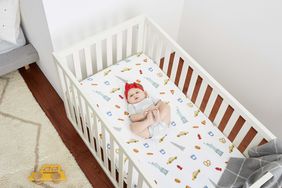 The 128 Best Things Anyone Ever Said in People 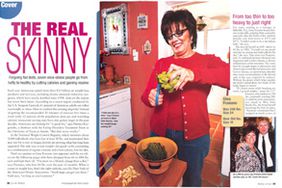