Cardi B Reveals Baby on the Way with Fiancé Offset During 'SNL' Performance: 'I'm Finally Free'

Cardi B showed off her baby bump while performing "Be Careful" on Saturday Night Live, as Offset shared his excitement on Twitter

Cardi B and Offset are expecting their first child together!

During her Saturday Night Live debut, the rapper proved all the rumors to be true and revealed her baby bump, wearing a tight sheer white dress while performing new single “Be Careful.”

“I’m finally free,” she said in a video posted on social media following her performance, alluding to the months of hiding amid widespread speculation about her pregnancy.

As Cardi B made her way down the hall after the set, her team gave the newly liberated mom-to-be a round of applause.

The baby on the way will be the first child for Cardi B, 25, and the fourth for Offset, 26, who has three children from previous relationships. TMZ reports she’s due the first week of July.

“Cardi and I look forward to our next chapter together,” the Migos rapper tweeted shortly after his bride-to-be’s bump-revealing performance.

Though many have speculated the song “Be Careful” was inspired by Offset’s alleged infidelity during their relationship, the pair now seem closer than ever.

The couple, who will both be performing at the Coachella music festival this month, got engaged in October onstage at Power 99’s Powerhouse concert in Philadelphia. Offset shared video of the engagement and Cardi B’s 8-carat diamond ring on his Instagram Story shortly after their performance.

Cardi B shared a photo of herself holding up the ring on Instagram, writing, “Jesus Christ I’m so emotional, @offsetyrn I loveee you so much. Thank you for seeing the potential in me since you met me. For giving me advice molding me and loving me.”

“[You’re] such an amazing man to me your family, friends, kids and you are extremely talented,” she continued. “I can’t wait to spend FOREVAAAA with you. Lets make a lot shmoney and love together.”

In March, Cardi B ruled the 2018 iHeartRadio Music Awards, bringing the house down with a medley of her hits to open the show and winning the prize for best new artist.

The rapper concealed her baby bump under a thigh-length maroon dress with plenty of tulle, thanking her team (and her “haters”) in her acceptance speech before announcing her debut album Invasion of Privacy, which dropped April 6.

“My album will be coming in April. Yes, sir. April,” she said before heading off the stage. “Stay tuned, motherf—ers!”

The “Bodak Yellow” rapper hasn’t been shy when talking about her desire for children. She appeared on the November cover for Rolling Stone and told the magazine she couldn’t wait to start a family with Offset.

“I need to make money for my family and my future family,” said Cardi B. “I’m not a YOLO person. I think 25 years from now. I think about my future kids, future husband, future house.”

As for what she saw herself doing in 25 years, she happily replied, “I see myself cursin’ at my kids.”

Next up, Cardi B is taking her bump on the road, and will perform at Coachella. 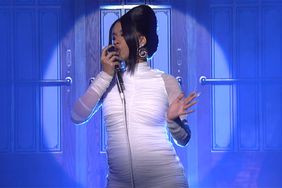 Did Cardi B's Sister Accidentally Reveal the Sex of the Rapper's Baby on the Way? 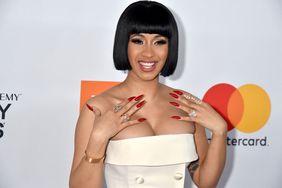 Pregnant Cardi B Celebrates 'Overwhelming' Love From Fans — Including Rihanna! 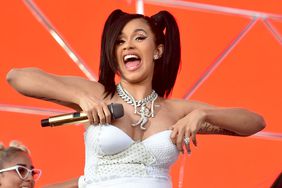 Pregnant Cardi B Brings Sass — and Her Growing Baby Bump! — to Coachella Debut 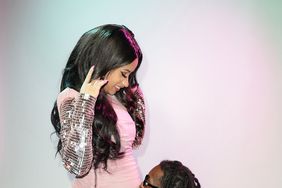 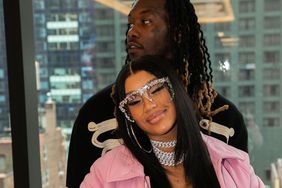 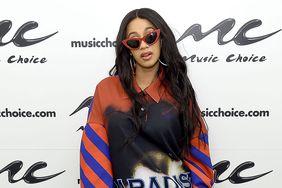 Cardi B Reveals Outrageous Wedding Details: 'The World Is Not Ready for It' 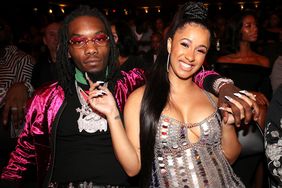