The Keeping Up with the Kardashians alum, 71, revealed that she has another grandchild on the way, a comment she made Thursday while visiting the Toy Store in Quincy, California, on the campaign trail, which was live-streamed on the small business's Facebook page.

(Caitlyn is running to replace current Gov. Gavin Newsom, a Democrat, in a special election next month after a Republican-led effort gathered enough signatures across the state to force a recall vote.)

The Olympic gold medalist did not say which of her kids were expecting. Caitlyn has six adult children: Kylie, Kendall, Brody, Brandon, Cassandra and Burt, as well as stepchildren with ex-wife Kris Jenner: Kourtney, Kim, Khloé and Rob.

While Jenner didn't confirm, later on Friday, PEOPLE confirmed that Kylie, 24, is pregnant, expecting her second baby with Travis Scott.

In May, Caitlyn said on CBS This Morning that when it came to her campaign, she did not expect her celebrity children to be vocal about her political aspiration.

"I did speak with all my children and I said, 'Hey, I don't want one tweet, I don't want you—this is my deal,' " she said at the time.

A source told PEOPLE earlier this year that the famous family wants Caitlyn "happy," regardless of whether they agree with her politics: "There have always been differing political opinions within the family. But everyone can agree on one thing: They want Caitlyn to be happy." 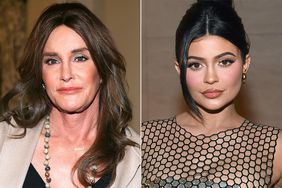