According to In Touch, a family insider says that after nursing her two sons in such a short period of time, Britney Spears’ breasts have begun to sag and the popstar is not happy. She reportedly told her newly eastranged hubby, Kevin Federline, pre-split that, "she wants her breast redone and he agreed that they need a lift."

For those of you concerned about gettingsaggy breasts from breastfeeding, we want you to know that pregnancy causes breasts to sag, NOT breastfeeding. This "family insider" doesn’t know what they are talking about. Why does pregnancy cause sagging, or ptotic, breasts? According to Sportsdoctor.com, "Under thehormonal influence of pregnancy and lactation, the glandular tissue(and sometimes the fat content as well) increases, stretching the skin.When the hormonal stimulation is gone, the breasts return to theirpre-pregnancy size, but the skin is stretched and the breasts appear tosag." So please don’t let that dissuade you from breastfeeding your child.

"Britney is definitely doing this, "the pal says. "She just can’t wait to get her breasts back."

Along with personal reasons, Brit is said to be trying to get her body back the way it was pre-babies for her 2007 album release and pop comeback. She plans to seek advice from from some of LA’s top ranked plastic surgeons as early as next month, however a couple of specialists shared their belief that Britney needs to set a later date to consider breast surgery.

Dr. Robert Rey of Dr. 90120 says, "I recommend waiting six months after the last drop of milk from breastfeeding until I perform surgery."

A breast lift, or mastopexy, is typically performed on an outpatient basis, under general anesthesia and takes 1 1/2 to 3 1/2 hours. An anchor-shaped incision is made, repositioning the areola, removing excess skin. Stitches around the areola and down the breast and along the crease will fade evntually but they are permanent. Having the surgery doesn’t mean your breasts will be perky forever- they are still subject to gravity and aging, as well as the effects of future pregnancies and weight fluctuations. For more information and illustrations, visit PlasticSurgery.org.

Photo from PEOPLE, used with permission 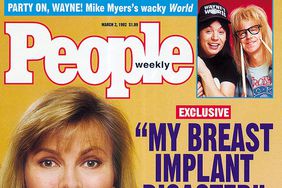 Britney Spears Wants to 'Connect With Y'all'

Rumor: Britney to have boys baptized 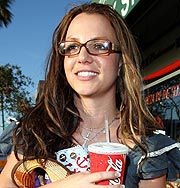 Britney Spears Wants You to Direct Her Next Music Video