Actors Brad Pitt and Angelina Jolie introduce their 3-week-old fraternal twins, Knox Léon and Vivienne Marcheline, in the latest issue of PEOPLE. Delivered by c-section on July 12th in France, the twins are featured in a 19-page spread in the magazine this week, along with older siblings Maddox Chivan, 7 this week, Pax Thien, 4 ½, Zahara Marley, 3 ½, and Shiloh Nouvel, 2. The issue will be released on Monday. For the international Hello! cover, click here to visit HelloMagazine.com.

Click ‘Continue Reading’ for a full-size photo, quotes, and to leave comments!

Talking about their growing family, Angelina tells PEOPLE, "It is chaos, but we are managing it and having a wonderful time," while Brad adds, "It’s still a cuckoo’s nest."

The pair, who deny having fertility treatments — "If they had been conceived through IVF we would have been happy to discuss it" — shared that they were "in shock" when an ultrasound showed twins. "We could not stop laughing," Angelina says. "We burst into hysterics," explains Brad.

My sister had made a joke about twinsliterally the night before, because my grandparents and sis both hadtwins. Angie was on the table during the sonogram, and we were inhysterics. We didn’t see this one coming.

Brad described the naming process for the babies, as well as their looks and personalities, to Hello! and PEOPLE. While Marcheline is in honor of Angelina’s late mother, "the name Vivienne came to us early, as if she named herself. She hasalways been Viv." Knox is named after his grandfather, while Léon "is a classic French name."

I dare to say that Viv is proving to resemble Angie in spirit, attitude and physicality. She is quite elegant like her mother. And Knox, he’s a bit of me. He likes music like his dad. When he was born he looked like Putin!

The older siblings are extremely involved and love having new babies in the house, Brad and Angelina share. "This is Mad’s fourth and fifth time at becoming an older bro. He’s asking us when we can have more!," Brad says. The girls are equally enthralled, Angelina reveals.

Shiloh calls them her babies. She and Zahara pick out their clothes,help change and hold them. It’s sweet, they are like little mommies.

Angelina, who is breastfeeding the twins, tells the magazine that keeping the babies on the same schedule has been a key to their success. When Knox and Viv are done nursing, the other children like to hold them, and also help with baths and changing.

A: They eat every three hours and I’m getting better at holding them both for breastfeeding at the same time, so that helps.

B: We try to get them to eat simultaneously for the sake of management, but it gets a little crowded at the bar! 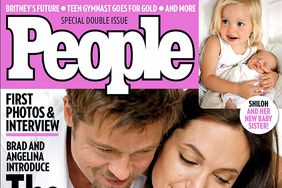