New mom to twins Dolly Rebecca Rose and Charlie Tamara Tulip, born Dec. 28, Rebecca says her secret to postpartum weightloss was breastfeeding. After gaining 60 lbs. during her pregnancy, “ “Extra!”, “I think within the first three weeks, I took off like 35 lbs. without doing anything,” adding, “[It's] the very best diet I’ve been on.” Her second secret? Spanx!

A commitment to working out and a healthy diet got Halle Berry back in her pre-baby shape just two months after the birth of daughter Nahla Ariela (born March 16). Besides eating vegetables, lean proteins and complex carbohydrates (and drinking lots of water), the Oscar winner jumped into a five-day-a-week workout of cardio (including kickboxing) and strength training to help her regain her figure.

Tori Spelling struggled to lose her baby weight after daughter Stella Doreen's birth on June 9, but made a decision not to allow it to stress her out. "If you get obsessed, you’ll miss out on great moments with your children," she said. Instead, she made it a family affair by cooking healthy meals and spending active time outdoors with her brood, including husband Dean McDermott and son Liam, who turns 2 on March 14.

Jennifer Lopez got back her famous body with an intensive regimen of running, swimming and biking to prepare for the Malibu Triathlon in September. But the singer-actress embraced the almost 50 lbs. she'd gained during her pregnancy with twins Max and Emme (who turn 1 on Feb. 22). "Right now, [I don't care about getting my old shape back], she told PEOPLE weeks after their births. "I even play with my little leftover belly, you know?"

Matthew McConaughey's leading lady, model-designer Camila Alves, opted to forego exercise for six weeks after giving birth to son Levi (born July 7). Instead, she focused on breastfeeding and eating healthfully – including greens, lean proteins and fresh fruit – as she recuperated from her Cesarean section and 60-hour labor. "It wasn't such a pleasant experience,” she told BabyCenter.com. "We went through 14 hours with contractions every two minutes, no epidural, no nothing."

"I ate with no guilt!" actress Poppy Montgomery told PEOPLE about indulging in treats like Häagen-Dazs Dulce de Leche ice cream during her pregnancy with son Jackson Phillip Deveraux, who turned 1 on Dec. 23. To get back in camera-ready shape, the Without a Trace star signed up for meal-delivery service Sunfare and exercised at home six days a week with the P90X total-body workout DVD. "It was hard, but worth it," she said.

Nicole Kidman kept up a rigorous exercise regime of spinning, walking and doing yoga all throughout her pregnancy with daughter Sunday Rose, who was born on July 7. And just days after giving birth, the trim Oscar winner – who had practically lost her small baby bump – was back in workout mode and taking a yoga class.

During her pregnancy with 14-month-old daughter Ever Gabo Anderson (who turned a year on Nov. 3), actress Milla Jovovich "wasn’t the crazy pregnant chick. I’m crazy anyway, so pregnancy really evened me out," she told PEOPLE in October. "I was like, ‘Whatever, I’m 200 lbs. Get me another bagel.' " But to help drop the 70 lbs. she'd gained, she enlisted the help of trainer Harley Pastnernak. "It’s good for me to be disciplined, because in so many areas of my life, I’m kind of lazy."

Garcelle Beauvais-Nilon had reached 172 lbs. while pregnant with twin sons Jax and Jaid (who turned a year on Oct. 18), But instead of trying to drop her baby weight through intense exercise, she ordered the low-carb meal delivery service Sunfare (which had her on 1,200 calories daily). "I don't have a six-pack," the actress – who eventually got back into Pilates and running on a treadmill three times a week – told PEOPLE in May. "But if I did, it'd mean I wasn't spending enough time with my kids."

After giving birth to daughter Honor Marie on June 7, Jessica Alba says nursing helped her begin to trim down. "I lost the tummy just breastfeeding," she told OK! And the actress followed trainer Ramona Braganza's 321 Baby Bulge Be Gone plan, which consists of workouts five or six days a week and a low-fat, low-carb diet, to help lose the 35 lbs. she gained during pregnancy. "She always gives me 100 percent," Braganza told PEOPLE. 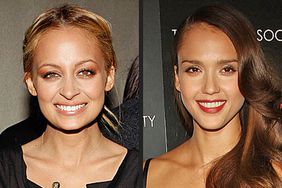 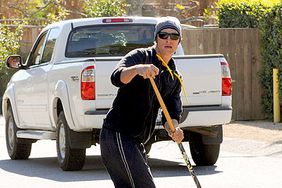 Poppy Montgomery: 'I Ate With No Guilt!'

Stacy Keibler: How I've Completely Bounced Back After Baby in 4 Months 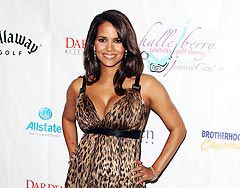