Beyoncé and Jay Z's little girl has already done more than we ever will: topped charts, toured the world in a private jet, starred in music videos – and, oh, we're just getting started

We dare to say that Blue even upstaged her superstar parents at the red carpet for the Council of Fashion Designers of America Awards, at which Bey was crowned Fashion Icon.

SERIOUSLY, THOUGH. DID YOU PEEP HER OUTFIT?

While you spent your summer Pinning pics of fantasy vacation destinations, BIC lived your dream on a 21-date jaunt … also known as mom and dad's On the Run Tour. Blue racked up plenty of frequent flyer miles along the way: Miami, Toronto and Paris were just some of the stops on Beyoncé and Jay Z's tour itinerary.

Actually, who needs all of those miles when you have this aircraft at your disposal?

SHE'S DIALED UP HER CUSTOM WARDROBE

It's so hard figuring out what to wear with your purple jewel-encrusted crown – unless you're Blue, whose wardrobe includes monogrammed leather jackets and mini Timberlands. Jealous much, North?

SHE'S WORKED ON HER FRENCH SKILLS

Remember when you saved up and waited until your semester abroad to see Paris? Well, Blue has already been there, done that – we actually lost count after she was spotted dining out in the City of Light at just 15 months old. (And, in case you were wondering, yes she was indeed conceived there.)

A clever Halloween costume: hard. Funny couples costume: harder. Adorable parent-toddler costume: Impossible … except for Blue and Bey, whose nod to Janet and Michael Jackson deserves all the candy. All. Of. It.

SHE'S MADE A BABY VIDEO EVERYONE WANTED TO WATCH

We're not trying to underestimate that video your dad recorded of you covered in sweet potatoes, which boasts a whopping three views (you, your dad and your grandma). Meanwhile, Blue's close-up in mom Beyoncé's music video for her song "Blue" has racked up more than two million views – and counting.

We don't know what you had accomplished by the time you turned the wise age of two days old, but as for BIC, her cries were already sampled on a track with her superstar dad. That's right: Before she was potty-trained or could recite the alphabet or, you know, say words in general, she became the youngest person to ever grace the Billboard charts. 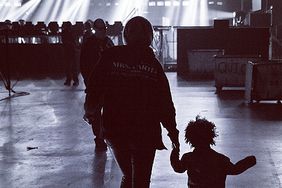