Baby on the Way for Black Eyed Peas' Taboo

There’s an addition to the pod on the way: Black Eyed Peas rapper Taboo, whose real name is Jaime Luis Gómez, has announced that he and wife Jaymie Dizon are expecting their first child together this summer. This will be the second child for Taboo, who is also dad to a 15-year-old son, Joshua, from a previous relationship. Taboo, 33, shared with US Weekly that he and Jaymie are, “very excited.”

Taboo and Jaymie were married on July 12th, 2008. Last evening, the Black Eyed Peas kicked off the Grammy Awards weekend with a performance at the Conga Room benefiting their charity, the Peapod Foundation. The group will release a new album in June. 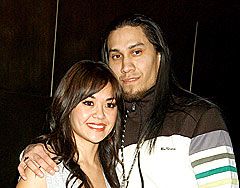 Taboo of the Black Eyed Peas Is a Dad-To-Be