He’s here — ahead of schedule!

Masterson, 40, posted the same picture on Twitter, writing, “#TheGuncles fam is NOW 4! THRILLED to share the arrival of our son – Bosley Jo Masterson-Horn.”

Their newborn’s name holds special meaning for the couple, who chose to skip the baby books and made their decision based off inspiring moments throughout their journey to a second child.

“We’re so thrilled that our son, Bosley Jo, has arrived! When we heard the news [that we had been chosen by a birthmother], we were laying in bed watching Elementary, and that night, there was a character named Bosley,” Masterson tells PEOPLE.

“I said to Bill, ‘Bosley! I think that just sounds right. It feels like our son.’ We decided it was the top choice, and we texted our BFF Tori [Spelling] to see what she thought of the name. She immediately said something like, ‘I love it. So chic and like Charlie’s Angels.‘ Ha! It didn’t occur to us … But that made it even more perfect! And Boz or Mr. Boz are his nicknames. Simone calls him Baby Boz.”

As for their son’s middle name, the couple chose a moniker “in honor of a very dear, best friend of ours,” who passed away from cancer. According to Masterson, she was a strong supporter of their decision to expand their family further.

“JoAnne (‘JoJo’) was like family to us, and exactly two weeks younger than me. She was in our everyday lives and she knew how long we waited for Simone,” he explains. “She knew we wanted to have a second child — always saying that someday soon it would happen for us.”

And although she died before Masterson and Horn knew they would be welcoming a baby boy, JoJo and Bosley already share a special connection.

“Bosley was born in the same town that JoJo passed. We know in our hearts that JoJo sent little baby Boz to us via his amazing birthmother,” Masterson says. “This all happened so quickly — we know a sign when we see one — and this is DEFINITELY a sign!”

In August, the Extreme Guide to Parenting stars announced their plans to expand their family and were looking forward to seeing 4-year-old Simone step into her role as big sister.

“Simone is so excited about being a big sister and both Scout and I are only children, so we’re thrilled about being able to give her the gift of a sibling,” Horn told PEOPLE at the time.

Baby Boy on the Way for Bill Horn and Scout Masterson 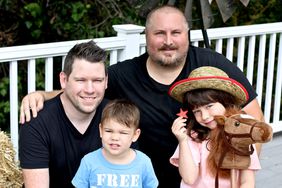 The Guncles' Bill Horn and Scout Masterson's Blog: The Ups and Downs of Our Son Bosley's (2-Year) Open Adoption