"He seemed like a very, very happy grandfather," says an eyewitness

He might be busy campaigning for his wife and making public appearances as a former President of the United States of America, but that doesn’t mean Bill Clinton is too busy to squeeze in some granddaughter bonding time.

Clinton, 68, could be seen holding on to baby Charlotte, 9½ months, as the duo bopped along to the music of Songs for Seeds, a music class put on by Apple Seeds, an indoor play space mom Chelsea Clinton and daughter Charlotte enjoy.

“They were dancing along to the music, moving to the beat,” says an observer. “He has the most present, positive energy, and he was exuding that to her. He seemed like a very, very happy grandfather.”

The sweet outing comes just after Clinton gushed about his role as grandpa during a Texas event alongside another former president and current grandfather: George W. Bush.

“When we started this program, he said to me that when you becomes a grandfather, you fall in love all over again,” Clinton said while sitting next to Bush at the graduation of the inaugural class of the Presidential Leadership Scholars program in Dallas last week. “And that’s what happened.”

He also got giddy talking about how Charlotte reached a milestone that lit up his life.

“[Last night] my granddaughter – 9½ months – for the first time when I walked to her room, [Hillary] said “Oh, there s your granddad,” and she turned around and pointed at me,” said Clinton. “That was worth more than anything anybody has said or done.”

Bill Clinton: My Granddaughter Is the 'Greatest Thing Since Sliced Bread' 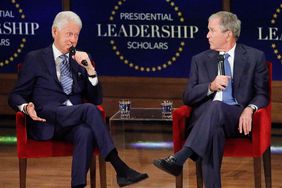 Bill 'Pop-Pop' Clinton and George W. 'Jefe' Bush Try to One-Up Each Other About Grandparenting 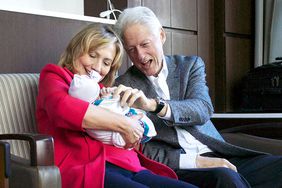 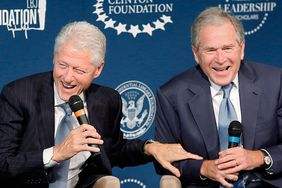