According to the Hollywood Rag, Tom Cruise and Katie Holmes have invited their British friends David and Victoria Beckham to meet baby Suri. A source is quoted as saying, "David and Victoria are honoured that Tom and Katie have asked them along." However, the invitation came with a few restrictions. David and Victoria will not be allowed to touch Suri or speak baby-talk around her. The source also said the visit "will be very difficult for Victoria, because she just loves babies and is trying for a daughter with David at the moment."

RUMOR: Tom Cruise and Katie Holmes fear that Suri might be a "target for kidnapping plots"

Rumor: Posh to adopt a girl? 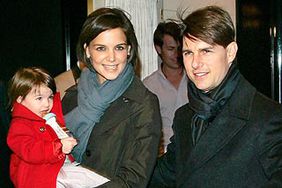 Rumor: Are Katie Holmes and Tom Cruise expecting a boy?