Baptism of Countess Leonore in the Netherlands

Countess Leonore, daughter of Constantijn and Laurentien of the Netherlands, was baptised today at Het Loo Palace. All the Dutch royals were in attendance, including pregnant Princess Anita and other royals such as Norwegian Princess Martha Louise who assited with her daughters Maud and Leah.

Princess Maxima, who recently visited her homeland, Argentina, was one of the godmothers and looked impecable in a white and blue coat. She attended with her family, that will be growing soon with the birth of the new baby (her pregnancy was announced last week).

Mabel of the Netherlands was also present with Luana and Zaria, for whom it’s the first public appearance.

Countess Zaria's baptism and photoshoot for Willem-Alexander and Maxima 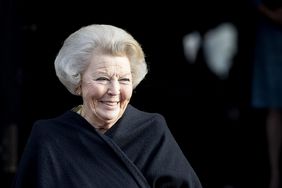 All About Princess Beatrix, the Dutch Monarch Who Abdicated the Throne, Lost a Son and Married a Former Member of the Hitler Youth