Jesse Csincsak and Ann Lueders, former contestants on The Bachelorette and The Bachelor, aren't expecting their first child until the winter. But they tell PEOPLE they've already picked out a name, Noah, and have doubled the size of their family in the meantime by adopting two Siberian husky puppies.

Jesse Csincsak and Ann Lueders, former contestants on The Bachelorette and The Bachelor, aren’t expecting their first child until the winter.

But they tell PEOPLE they’ve already picked out a name, Noah, and have doubled the size of their family in the meantime by adopting two Siberian husky puppies.

“We thought, ‘Hey, let’s just take the hit all at once,'” says Csincsak, 28, a pro snowboarder who won the fourth season of The Bachelorette (though his relationship with DeAnna Pappas didn’t last).

“So, you get all the puking, vomiting and peeing on the carpet out of the way all at once, and then buy new furniture, all at once!”

The couple first met last year on a cruise for former Bachelor and Bachelorette contestants. Then, this spring, Lueders, 28, who was on Jason Mesnick‘s season of The Bachelor, found out she was pregnant.

“It was exactly what we wanted to happen,” she says. “It wasn’t a reaction of, ‘Oh no, what are we going to do?’ It was great news to us.”

The couple, who officially got engaged Aug. 6, are now looking forward to Noah’s arrival – which will also be good news for Jesse’s personal-hygiene habits.

“I’ve caused Jesse hygiene problems,” admits Lueders. “Anytime he uses Listerine or wears cologne, I feel like I start to get a little sick!” 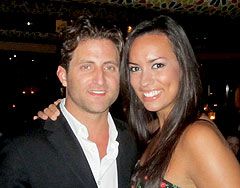 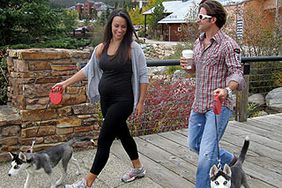