Ashley Iaconetti and Jared Haibon are going to be parents!

The Bachelor in Paradise alums, who wed in August 2019, revealed on an Amazon Live stream Thursday that they are expecting their first baby together. Iaconetti is 10 weeks along, with a due date set in February, and they plan to find out the sex of their baby on the way at an upcoming appointment.

Haibon, 32, and Iaconetti, 33, said they have a boy name picked out but are still brainstorming for a girl. The mom-to-be mentioned that she's been experiencing morning sickness 24/7, admitting during the live stream, "It's been a hard time, guys."

"It's weird to say we're gonna be parents. When does it sink in?" Haibon added during the live stream.

In February, Haibon said that they were actively trying to conceive their first child together, saying on an episode of Click Bait with Bachelor Nation podcast that they'd been trying for about three months at that point.

"We're actually in the 'trying' phase," he said at the time. "... We're gonna try and let the chips fall where they may. Because, you know, we've been told it could — who knows how long it could take."

Haibon noted that Iaconetti wears a watch with a tool that tells her when she's ovulating. "She's very good at 'this day, that day, that day, this day,' " he said with a smile. "It's like, 'Alright, hey, you just tell me when.' "

As for whether he wanted a son or daughter first, he said, "Honestly it doesn't matter. I'd love to have both a boy and a girl. Now having a girl dog [named Lois] — this is weird — but, like, now I really want a girl because having a girl dog, she's so dainty and delicate. It's like Daddy's little girl, and I'm like I kinda want this in a human now."

RELATED VIDEO: Ashley Iaconetti Says Jared Haibon Deserves 'Round of Applause' After 13 Weeks with His In-Laws

In May, Iaconetti opened up about their process to become pregnant, saying on Instagram, "A couple months ago, I was saying I would start feeling worried if I wasn't pregnant by June." The reality star also dispelled any thoughts that she and Haibon were "struggling to conceive."

"That description is for couples actively trying for a year. I knew when I decided to be open about this chapter of our lives that I put a public timer on how long it would take for us to get pregnant," she said at the time. "You usually don't know how long people have been trying to conceive once they announce their pregnancy on the gram and that makes it feel like people get pregnant like that!"

She concluded that she doesn't regret sharing her journey, despite some negative comments that have been thrown her way: "I love the dialogue it's created with some of my followers and I think it's important to normalize that a lot of people don't get pregnant right away."

Celebrating their one-year wedding anniversary back in August, Iaconetti and Haibon reflected on finding each other and making the most of their time as husband and wife.

"I've never cried less than I have this year!!" Iaconetti began her caption on Instagram, which accompanied a gallery of her "favorite" romantic snapshots from their Newport, Rhode Island, ceremony. "Before Jared, at the end of every day, I'd think, 'I'm one day closer to being with my person.' Now every night I think another precious day has gone by with my love."

"I don't think personally life can get any better than it is now for us and I'm grateful for it every day," she continued. "I love being in our comforting, supportive, playful, loving marriage." 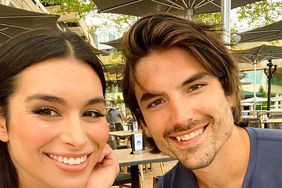