Armie Hammer is a first-time father after welcoming a daughter with his wife, journalist Elizabeth Chambers, on Monday, Dec. 1, his rep confirms to PEOPLE exclusively.

Update: The couple have chosen the name Harper Hammer for their daughter, his rep confirms to PEOPLE.

According to a source, the name is a nod to the street Chambers lived on when she met Hammer eight years ago.

The Lone Ranger actor Armie Hammer is a first-time father after welcoming a daughter with his wife, journalist Elizabeth Chambers Hammer, on Monday, Dec. 1, his rep confirms to PEOPLE exclusively.

“Both mom and baby are doing great!” the rep tells PEOPLE.

The couple’s daughter was delivered by Dr. Jay Goldberg.

A source close to the couple add that the proud new parents are “over the moon in love” with their baby girl and are looking forward to introducing her to family and friends.

Hammer, 28, and Chambers, the Chief Correspondent for the Human Rights Foundation, announced their pregnancy in June, one month after celebrating their four-year wedding anniversary.

“They will be amazing parents,” a source told PEOPLE at the time. “They are such a loving couple that this is the perfect next chapter in their lives.”

Hammer — who owns Bird Bakery with his wife in San Antonio, Texas — will next be seen in Mine and stars in Guy Ritchie‘s The Man from U.N.C.L.E., out next year. 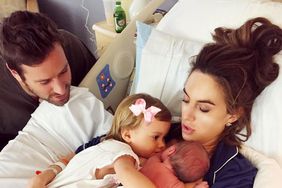