Anya turned 9 months old on July 14th. I feel like she has really grown up in the last few weeks. She has been sitting up (from lying down position) for a couple of weeks now. You should have seen my expression the first time I found her sitting up- she had woken up in the middle of the night and was crying (she always wakes up mad for some reason) and was sitting upright in her crib.

Crawling!
Just a few days ago she started crawling and each day she gets faster and faster. I have learned that I simply cannot turn around for more than a few seconds because I have found her sticking her hand in my coffee which I had left on the floor because I was playing with her and trying to caffeinate myself at the same time (it was not hot) and just yesterday I caught her chewing on my sandal like a dog. Since then, I have been making frequent use of the Bumbo seat, high chair and ExerSaucer for when I need to do something. It is extremely cute to watch her crawl. I can’t believe it’s my kid crawling- she looks like a doll.

Fortunately, she has only the slightest tinge of separation anxiety. If she notices I have left the room, she starts complaining, even though I always keep talking to her. She’s fine if she’s with someone else, anyone else.

Teeth & Food
She has six teeth now- four on top, two on the bottom. It has changed the look of her smile and though I mourned the gummy smile, I am now used to this toothy grin. We have now added toothbrushing to her bath ritual, which she enjoys wholly (except for having to have shampoo washed out of her hair). She’s been eating solid food since just before her 6 month . She enjoys avocado, cooked egg yolks, rice, rice cakes, sweet potatoes, prunes and peas the most. She is a HUGE fan of Cheerios. If you spread a bunch out on her highchair tray, she will LUNGE at them and complain when they are gone.

Beach
We went to the beach for the first time today and she liked it. She didn’t care too much for the sand but liked the water. I wouldn’t say she loved the water but she wasn’t scared by the cold water, the waves or getting splashed in the face a little. As my cousin said, she’s very brave. We had gone to some pond beaches when we were in Cape Cod in late June. The water was much warmer and I think she enjoyed it more but this was more exciting for her.

Playing
She continues to be an extremely happy baby. She is frequently smiling, laughing or at least content. She loves to play with her toys. Her favorite new toys are a big metal bowl and a plastic Chinese soup container. At my mother’s, she is happy to play with some measuring cups. Why bother buying toys when they love the stuff you have around the house?

Tricks
For the past month, she’s been playing peek-a-boo by covering herselfwith a blanket when we say "Where’s Anya?" and then pulling it down sowe’ll say "There she is!" She’s waving hi and goodbye, making kissing noises (that sounds more like sucking noises) but by far, the cutest thing she started doing recently is clapping and clasping her hands and waving them up and down while making a sort of "yay" noise.

We had her 9 month check-up on Monday. She’s 18 lbs 14 oz and 27 1/2 inches long. It’s time to move her out of her Peg Perego Primo Viaggio and into her Britax Marathon convertible seat! Of course, she’ll be rear facing (and well beyond the first year).

And with that, I present you with her 9 Month Album. Photos are from the past 2 months. (I moved the photos from my .mac page to Typepad, where we won’t run out of bandwidth.) 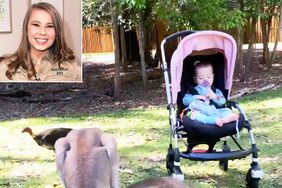 From The Archives: The Bumbo Baby Seat

Steal That Style: Catch Up on Car Seats!