Jack Black confirms the happy news while in Cannes

This time around will be double the pleasure for Angelina Jolie and Brad Pitt, who are expecting twins.

Jack Black let the news slip while doing a joint-interview with Jolie in Cannes to promote their movie, Kung Fu Panda. “You’re gonna have as many as [the] Brady Bunch when you have these,” he said during the chat with Today show’s Natalie Morales.

Asked by Morales if she is indeed having twins, Jolie replied, “Yeah, yeah, we’ve confirmed that already. Well, Jack’s just confirmed it actually.”

The children will be the fifth and sixth for the Jolie and Pitt. The family currently consists of Maddox, 6; Pax, 4; Zahara, 3; and Shiloh, who turns 2 this month.

Pressed about the gender of the babies, Jolie said, “We would like to keep that private.”

Pitt and Jolie are “thrilled” about adding to their brood, a source close to the couple told PEOPLE after Jolie debuted her baby bump at the Independent Spirit Awards in February. 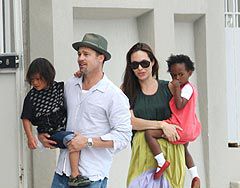 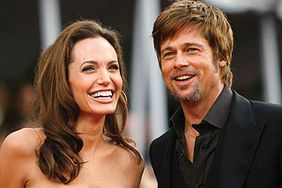