As Angela Kinsey settles into her pregnancy, she’s getting much more experimental with the snack food than she is with the baby names.

“I’ve been really craving Snickers, so I have a bag,” the actress, who plays Angela on The Office, tells PEOPLE. “I keep them in my fridge. I like them really cold. So, Snickers has really been making me happy.”

She’s also thinking about baby names, but will go a more traditional route there. “I have a feeling my husband would want us to keep that to ourselves,” she says. “Nothing funky, I can say that. Nothing crazy.”

Kinsey, 36, who is expecting her first child with TV writer Warren Lieberstein, also says prenatal yoga has been “hilarious,” and that she’s exploring maternity clothes and pregnancy books. “As you flip later in the book, it’s all scary, so I just try to stay in the front of the book,” she says.

Best of all, she reports no morning sickness whatsoever.

For the prenatal yoga, Kinsey, who spoke to PEOPLE at The Hollywood Reporter’s Women in Entertainment Power 100 Breakfast, will soon have an unlikely companion – castmate Jenna Fischer, who plays Pam on the NBC sitcom. Fischer isn’t pregnant, but says yoga is good for her back, which she injured in a fall in May.

“Not to start any rumors on my part,” Fischer, 33, tells PEOPLE, “but my doctor actually thought that the low-key prenatal yoga was a good way for me to maybe step back in to working out.”

Asked whether Kinsey will be a good mom, Fischer doesn’t hesitate. “She’s already being a great mom,” she says. “You know, she’s doing all the stuff you’re supposed to do to stay healthy and take care of yourself. And you know, nesting and all that good stuff – so she’s going to be a great mom!” 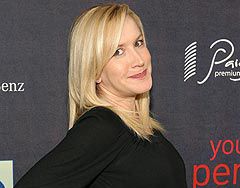 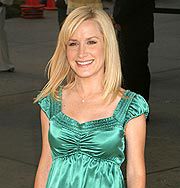 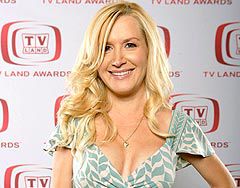 Angela Kinsey on Her Mothering Mistake

Angela Kinsey is Back on Set with Baby 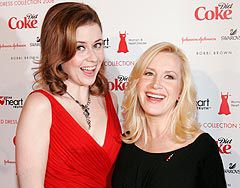