"The second I put him in the car, he starts crying and crying and I was like, 'Oh my God,' " new dad Andy Cohen recalls to PEOPLE of son Benjamin, 4 months

Between “so much gear, it’s unbelievable” and unpredictable moods, Andy Cohen now knows that traveling with a baby is no easy feat.

The Watch What Happens Live host — who recently leveraged Autotrader’s 12 Best New Cars for 2019 list to find the perfect family vehicle — spoke with PEOPLE about hitting the road with his son Benjamin Allen, 4 months, and how the process has changed since he became a dad in February.

“It is stressful. It’s way more stressful than it was before,” admits Cohen, 51. “We had our first solo car trip on Father’s Day. We went to my friend’s place in White Plains for a little hangout day by the pool with some dads.”

“The second I put him in the car, he starts crying and crying and I was like, ‘Oh my God,’ ” he continues. “I have this rearview mirror thing over his car seat, so I could just see him in terror.”

How Can I Make Traveling with Kids Easier?

Luckily, all it took to soothe baby Benjamin was a little movement — and the dulcet tones of the father-son duo’s favorite band.

“Once we started rolling and I got the Grateful Dead playing, which always calms both of us down, he was great,” Cohen shares. “He was a champ. I actually think it’s the way to get him to fall asleep — put him in the car.”

The Bravo star (who just celebrated 10 years of hosting WWHL) tells PEOPLE he sometimes feels overwhelmed by parenthood four months in, both when he’s with his son and otherwise. But he has become a pro when it comes to handling the intense feelings.

“I just say, ‘Okay, deal with what’s happening today,’ ” Cohen says. “The whole thing is overwhelming. I have to say, just getting back to the stuff and gear, that’s part of what makes it so overwhelming. The convertible thing, it’s hilarious. I knew last summer when I was tooling around that it was my last summer in that car.”

Speaking of vehicles, Cohen just snagged an SUV with the help of Autotrader, which he refers to as “the go-to resource for car shoppers with the largest selection of cars to choose from.”

And that additional cargo space might come in extra handy sooner rather than later, as the star isn’t ruling out becoming a father of two within the next few years.

“If I did it, I would say I would need to do it [within] the next few years,” Cohen tells PEOPLE of giving Benjamin a sibling. “My sister is three years older than me and I loved that.” 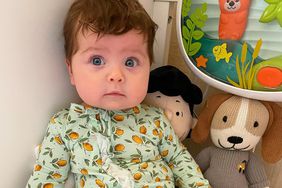