While living through a pandemic, who has time to shop for baby clothes?

The host of Anderson Cooper 360 revealed to The Late Show's Stephen Colbert that he's relying on pal Andy Cohen for baby clothes.

"I'm inherently cheap, I like a good value ... and, first of all, it's a pandemic," he continued. "I was planning on going shopping, which I hate to do, and then, like, online shopping, how do you do that for baby clothes? I don't know, it just seemed weird. So, yeah, he just gave me all the clothes."

The Friend-ly Push He Needed

The journalist also joked that watching Cohen become a dad assured him that he was ready for parenthood himself.

"He's been encouraging me all along," Cooper said. "And I figured, you know, if he can do it, well that sort of gave me the final push. Well, like, if he's got a kid, then — and his kid is amazing; Benjamin is incredible."

After Cooper announced the arrival of his baby boy, Cohen revealed on his SiriusXM radio show that his nanny left to be a caregiver for Wyatt.

"We had long planned this transition, but I certainly didn't expect it to happen during a quarantine, of course," said Cohen. "So we had to really handle this hand-off from one home to the next very carefully, but we did, and she is now with Anderson and I know she's gonna get Wyatt on a great sleep schedule just like she got Ben."

Cohen also expressed his excitement for his friend on his radio show.

"I'm so happy for Anderson," Cohen said. "We've been talking about this for a long time and I have been really enjoying Anderson coming over. His visits with Ben have taken on a special significance since we both knew for a while that Anderson was planning on [becoming a dad] himself."

Later on the show, when describing their sons' futures together, the radio host shared how he is also "so excited" for Ben and Wyatt "to grow up together and be friends and get to know each other," adding, "It's a great age difference for them to be pals, only one year. It was fun over this past year for Anderson to come over and for me to watch him with Ben and know that this would be his thing, and he was obviously paying attention to a lot."

The Bravo star applauded Cooper's "brilliant, brilliant announcement," which he admitted "had me in a puddle of tears" as "you really have to jump through a lot of hoops to have a baby as a gay man."

"He went through a lot, and I'm just so happy that his son is so beautiful and happy and healthy," Cohen said. "I've already seen Anderson light up and open up in new ways. Like all homes that welcome a baby, his home is now full of the music of new life and family." 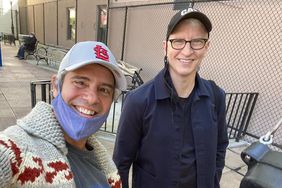