The Live with Kelly and Ryan host looks super proud to be cuddling pal Andy Cohen's son Benjamin Allen, who was swaddled in blue as the duo posed together in a photo gallery Cohen shared to Instagram in late February.

Cohen welcomed Benjamin, his first child, on Feb. 4, via surrogate.

The father of two soaked up the newborn love as he and Benjamin coordinated in blue, in a snapshot the Watch What Happens Live host shared in the same post featuring Ripa.

Another important man in baby Benjamin's life? "Uncle" Cooper, who dropped by Cohen's home for an "exclusive" one-on-one with the adorable infant in late February.

In the cute snapshot, the CNN anchor peered over the railing of Benjamin's crib. The two were locked in an intense gaze as Benjamin, wrapped snugly in his blue swaddle, lay in a cushioned baby lounger.

"Uncle Anderson got an exclusive," wrote the proud father. (And he's visited many more times since!)

"Guess what? Kyle Richards was the very first Real Housewife to meet my son today!" Cohen said during the March 12 episode of WWHL before the broadcast cut to a too-cute snapshot of Richards cradling Benjamin - who looked up at the reality star with a wide-eyed, curious expression.

"I put him in Gucci just for you!" joked the proud new father.

"I'm so in love with him I can't even take it," said Richards. "It's literally like holding Andy without the suit on … Like a little Andy."

"Went to meet @bravoandy's Benny and he is everything! Look at his proud Papa 👨‍👦and look at all that hair!" Lakshmi raved on Instagram, posting a series of images of herself holding Benjamin and one of the little boy peering over his dad's shoulder.

Kelly Ripa's husband Mark Consuelos got his own dose of bonding time with Benjamin in early April, when the Riverdale star met the father-son duo for brunch.

"I can't blame him for burrowing into @instasuelos," Cohen captioned the picture.

Benjamin looks cool, calm and collected while the Real Housewives of Orange County OG looks absolutely thrilled to take on the role of Aunt Vicki.

If fashion is something Ben wants to pursue in the future, who better to have than the legendary DVF in his corner?

Million Dollar Listing New York's Serhant and her daughter Zena spent the day with Andy and Zena's "future boyfriend and bestie" Ben in late October. The tiny tots could not look any cuter during their very first playdate together. 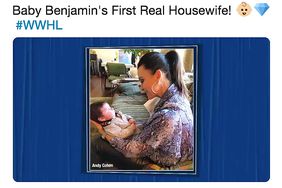 Kyle Richards Is First Real Housewife to Meet Andy Cohen's Son: I 'Put Him in Gucci Just for You!' 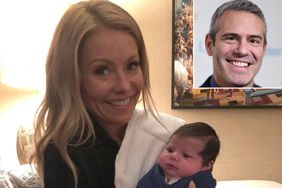