It’s a boy for The Bachelor star Andrew Firestone and his wife Ivana Bozilovic, Firestone’s rep confirms to PEOPLE.

The couple welcomed their first child, an 8-lb. baby boy, three weeks before he was scheduled to arrive at 6:48 a.m. on Saturday in Santa Barbara, Calif.

PEOPLE recently caught up with the father-to-be, who could hardly contain his excitement about becoming a dad.

“I’m here with my very pregnant wife and she looks glowing!” he said. “We’re very excited.”

Firestone and Bozilovic, an actress and model, married on July 5, 2008 in Los Olivos, California, where Firestone oversees the Curtis Winery. They became engaged in October 2007. 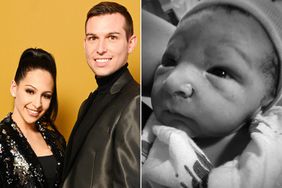